I threw this together to adjudicate the End War - the final battle to save the world.

It went fucking great.
Since it was a one-off (for now...?) I was intending to paper over any weirdness with the rules on the fly, but it ended up working pretty good on its own!

The actual scenario is very my-campaign-specific, but maybe it'll be useful if you need a one-off EPIC BATTLE or as a starting point for better mass combat rules. 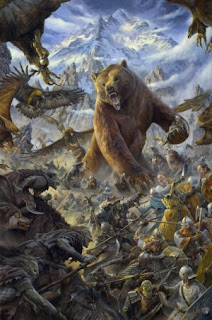 When I say Titan-Scale I mean Titan-Scale.
You're not ordering around individual units, you're dealing with entire armies clashing. I'm going for adjudicating a Lord of the Rings clash of thousands rather than a more cerebral tactical battle where you counter cavalry with pikes or whatever.
This means that combat is necessarily abstract.

Combat at the standard encounter scale is ineffectual and fruitless. If the PCs wish to impact the battle directly it will be in the realm of surgical strikes, diplomacy, or perhaps classic PC bullshit. 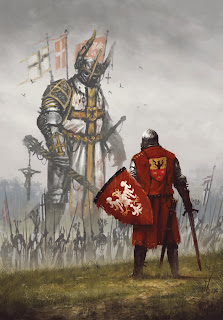 The Battlefield is a hex grid. Each hex is as big as you need it to be.
Here's what I had: 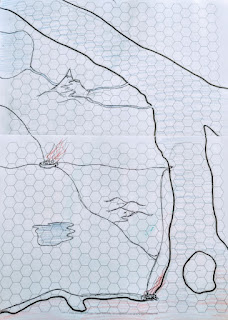 In this case, the hexes are approx 2-3 miles across.

Each Turn is about 1 hour.
Titan-scale units lumber across the landscape, while the Horde-Scale units practically zip around underneath their feet. 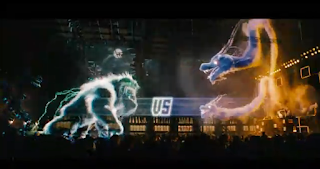 Horde on Horde Combat:
Each side rolls their combat die.
The Loser loses 2 Power, dropping down a die size.
The Loser may retreat a hex, if able.

Killing a Horde:
If a Horde is at 4 power (ie. uses a base d4 for combat) and loses a combat, they are destroyed.
Survivors may flee, if possible, as a useless noncombatant unit.

Horde on Titan Combat:
Hordes cannot harm Titans.
The best a Horde can expect to do against a Titan is to slow it down so that their Titan can get involved.
Exception:
Some Hordes might have a special ability that allows them to harm a Titan-Scale Entity.
(eg. in my End War, the Tentacle Cult could summon forth a titan-scale Tendril if left unmolested)

Speed:
Titan-Scale units all move at one hex per Turn.

Titan on Titan Combat:
Each Titan automatically hits and hurts the other - roll for a hit location to see what each hit.
If the Hit Location is Unhurt it becomes Hurt.
If it's Hurt it becomes Maimed.
If it's already Maimed, damage another Hit Location - attacking Titan controller's choice.

Killing a Titan:
Usually impossible, but you can Maim it enough that it's useless.
In my End War, there were enormous horse-sized Rot Grubs that would fuck up a wounded Titan. Luckily this never happened to the players' Titans!

Titan on Horde Combat:
The Titan wins automatically and takes no damage in the fighting.
The Horde loses 2 Power and may retreat if they wish.

Each Turn is an hour.
Each Turn goes like this:
1. PCs Give Orders
Write down what the PCs want the entities under their control to do.
You can't really change your orders once they're given on this scale.

Horde-Scale Entities move according to their Speed.
If there's any question of who goes first, fastest choose.

4. Horde Combat
If two enemy Hordes are in the same hex, they fight!
Follow the Horde-Scale rules above.

5. Titan Combat
If a Titan is fighting a Titan, or has a Horde attacking them, they fight!
Follow the Titan-Scale rules above.

6. PCs Do Stuff
After everything's moved and rolled for and all the rest, it's the PCs turn to take independent action if they wish.
We had things like "fly to a dead city to try to raise an army of survivors", "dive into the Tentacult to destroy their leader" and "chug a bunch of wizard drugs and cast a Titan-scale Force of Forbidment".
It was good shit! 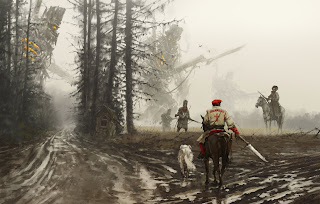 You can check out my original sheet for the End War here.

The goal was simple.
Kill Shub-Niggurath.

The PCs had, over the course of the apocalypse, united pretty much every other apocalyptic threat against this one true enemy.
They controlled the Apocalypse Dragon Ninhursag - the Earth Dragon - and had equipped it with the most virulent poison known to man. Any living organic matter that was touched by this noxious Omnipoison would be catalysed into more of the toxic gas.
If Shub-Niggurath was successful it would undergo planetary lysis, cracking the world like an egg and spreading itself far across the cosmos.


My intention for the push-pull of this battle was it to go something like this:
- Titans get into battle.
- When a Titan is wounded, they are vulnerable to the Parasite Grub Hordes that want to dive into the wounds and eat them.
- Wounded Titans need to be protected from the Parasite Grubs by their Hordes.

Instead we also got some of the most metal shit that's ever happened in the campaign, including a PC becoming a Titan-Scale monster and throwing a fucking Apocalypse Dragon at the Moon.
It was rad as hell!

Apocalypse Dragon Ereshkigal
- Unknown agenda.
- Airborne, but wings are Maimed.
- Gravity well will, if not stopped, pull down the moon.

The Black Sun Ultrademon
- Coming in from the north, Black Sun between its horns.
- Trailed by a wave of impenetrable darkness.
- Surprise! It comes in peace. Wants to rescue its constituent demons by entering Fortress-City Fate and turning into obols.

Tentacultists
Power 6. Speed 2.
- Protect the Prime Tentacle.
- Can summon a Titan-Scale tendril to damage Titans.
- Won't summon tendril if they're in battle with an enemy Horde.

Ereshkigal Drakencultists
Power 10. Speed 3.
- Defend their dragon at all costs.
- Can open Space Warp between two points anywhere on the battlefield.
- No clear agenda

Grubs
Power 6. Speed 1.
- 1d4 hordes spawn per Turn near random Titan.
- Spawn new 6 Power Horde in front of them if they win a battle. Insta-killed by Titan damage.
- If a Horde get to a Titan with a Maimed and undefended Hit Location - drill in, hitting another Hit Location (internally...) every Turn.

Apocalypse Dragon Ninhursag
- Armoured in bone: each hit location starts off with armour that resists one hit.
- Carrying the Omnipoison around its neck.
- Obeys the mental commands of POWERLAD

Bone Dragon
- Currently Ninhursag's armour, could potentially become own entity again.
- Head contains Ossuary of All Bones, allowing control of all Undead. Could be damaged.
- Controlled by Galaxy RJ

Orbital God
- Ranged Titan-Scale attack - can strike with impunity from above with god-beams.
- Distracted by urgent matters across the globe.
- Will listen to Styx and/or POWERLAD.

The Dead
Power 8. Speed 1.
- Defend Ninhursag at all costs.
- Gain +2 Power if they defeat a Horde with bones.
- Obey Galaxy RJ

The Army of Fate
Power 6. Speed 3.
- Mounted on Guber-brand hovercrafts
- Good at hit and run - bonus +2 to power if they didn't attack last Turn.
- Obey Styx

Angels
Power 8. Speed 2.
- Can be deployed at Styx's request.
- Can freeze a combat they're in - stalling it for one Turn.
- Obey Styx, via the Orbital God

my clearly v cool notes while i was working on this 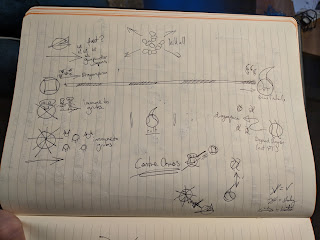 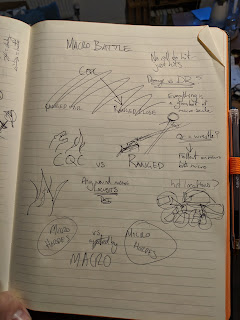 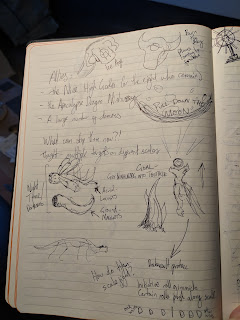 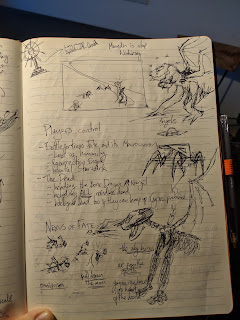 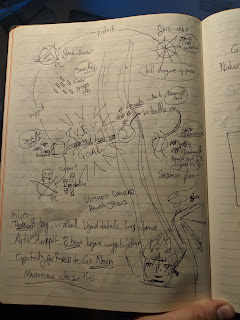 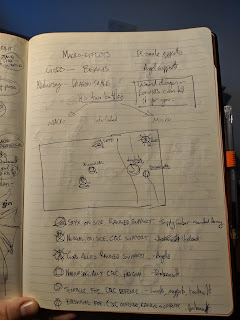