So hey, this is exciting. Not only have I got a magic item and a monster into the Referee book, as a result James Raggi himself asked me if I want to make a thing.
I SURE DO!

The Royal Forest of Rutland once existed across a vast swathe of south-east England. In the 13th century, most of the laws protecting the royal forests were removed.

In time the Forest of Rutland would be deforested.
It should not have been.

Deep inside, protected for centuries by the Verderers and the Forest Law, a great wen of rotting mould and organic matter swells and pulses.
It does not hunger, for hunger implies sentience.
It does not wish to infest all mankind, for wishes imply will.

That it consumes us, fills us, causes us to spread it across the land and reduce our civilisation to dust. That is not its will.
It is simply what the mould has evolved to do. 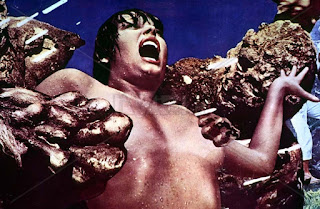 TITLE AS YET UNKNOWN
But The Doom That Came to Rutland amuses me.
Rutland Water drowned a whole lot of villages when it was formed which means I can say THIS IS WHY, and the tiny county's motto means Much in Little which would surely be easy to twist into ominousness.
Posted by James Young at 13:01 3 comments:

So I Ran a crappy free dungeon but it's ok I made it better.

I've been incredibly lucky with the modules I own.
One Page Dungeons, LotFP offerings, Last Gasp, various megadungeons, everything.

I did not realise this until now.
Behold The Tomb of Rakoss the Undying. A free thing that I picked up because it was free and billed as an adventure for levels 4-6, which is a bit of a hole in my collection now that my players have leveled up a bit without dying.

My players entered the dungeon by surprise so it is really my own fault for placing it without reading it properly. I was blinded by the radness of the cover.

It contains such wonders as:
- Giant fucking explanatory text bit about an evil army general.
- Giant fucking monologue from a quest-giver guy that runs for 500 words or so.
- Giant gaping wasteland of an overland map that takes two weeks to go from Generic Fantasy City to the dungeon. There is nothing of note in between except some legitimate quantum ogres who attack automatically when the party is sleeping within a day's march of the dungeon.
- Top tips like "Randomly roll dice at key moments behind the screen to give the illusion that they are in a dangerous area".
- Tons of awful boxed text.
- Arbitrary "these spells don't work here" effect on the dungeon because god forbid somebody use Teleport in a 10 room dungeon. "This curse is a plot device and cannot be overcome by spells or abilities of characters of this level".
- Just random stock monsters everywhere in the actual dungeon that just kind of hang around until you trigger the encounter.
- Every single monster appears and attacks, no question.
- +1 weapons and armour like it's going out of style.
- Spellbook that contains every spell up until 5th level. So unique. That's going to be real fun to list out to the player.
- The radical lich dude looming over the dungeon in the cover isn't even in here.

I now see how far the OSR has come in game design and playability, rather than simply aping the worst of the past. This dungeon could have been designed by any number of random dungeon generators.
But it was written two years ago, maybe it's taken that long for things to percolate. 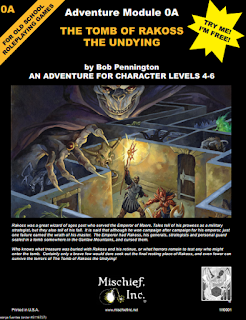 I'd placed this dungeon behind a statue in a mausoleum in a large, ancient graveyard for rich families. There's a smallish village next to it that is built around maintaining the graves.
The biggest mausoleum is for a family of career soldiers (the Jingois), and the dungeon itself is accessed from inside it as a sort of combination bunker/war room/temple.
The family have deep ties to a family of smiths (the Smiths, naturally) who also have a mausoleum in the graveyard.

The main wrinkle is that Alex Jingois, dweeby descendant of the soldier family, has styled himself Ave Myxylyx and turned to Necromancy while his parents are away fighting in the wars.
He's got the keys to the dungeon so he's been experimenting with the dead and trashing the place and stealing his corpse-based material components from the graves.
He's incompetent and level 1 but has the vicious streak of the cowardly. If he finds out people have been going into the dungeon he'll try to trap them in there so he has someone to blame for the mess when his hero parents return.
Everyone in the town thinks he's an alright guy who keeps himself to himself, if a bit of a black sheep of his family. He hasn't been showing up at the alehouse lately though, so people are starting to wonder if he's getting depressed without his parents around.

I usually avoid magical weapons as loot, but this is a dungeon belonging to a long line of warriors.

The Mausoleum
The Jingois Mausoleum contains a bunch of valuable grave goods, the most chief of which is the Red Rapier. It's clutched in the hands of a shrivelled body in a stone coffin with a glass lid. The lid can't actually be removed, so must be smashed in order to get the sword.
The Red Rapier gets more powerful the more blood it consumes, but eventually turns its bearer mad with bloodlust.
The Red Rapier has turned the tide of many famous battles. Ensuring it is only used in times of dire need is the charge of both families.
Alex thinks he's doing a good thing by meddling with Necromancy, the Red Rapier feeds on blood and skeletons have no blood, so they're the perfect way to stop the Rapier's wielder if they go out of control. He thinks his parents wouldn't understand.

Also here:
- Two sets of good quality leather armour. One's chest is painted with a surprisingly christmassy reindeer leaping in front of a fir tree. This is the Jingois family crest. The other is painted with an acorn in front of a crown sitting on top of an anvil. This is the Smith family crest.
- 4 silver-tipped mahogany spears.
(These things courtesy of Abulafia)

At the back of the mausoleum is a statue of an armoured warrior holding a big black axe. In the light of a torch it seems to move menacingly, although it does not. The base hinges down (and has been used often and recently), revealing a crawlspace that heads into the dungeon proper. Someone in heavy armour can just about fit if they've got people helping them through.


The Dungeon in General

The walls, floors and ceilings are absolutely covered with carvings of famous battles. They're all painted in a variety of colours like gaudy greek statues.
The one thing they all have in common is a man with a red sword at the forefront of every battle, always striking the killing blow.

Notes on the famous battles are on the room key.
Considering my campaign world backstory is a mixture of Dwimmermount, Hammers of the God, and a sort of mangled real world alt-history, you might want to change the details.

Alex heads down to the dungeon every night when it's getting dark (7ish), changes into his necromancer costume, and experiments with spells. He's not evil, just fascinated and a bit obsessive like that kid who tried to build a nuclear reactor in his shed.
If he finds evidence that people have been down there: (ie. basically any normal dungeoneering activity) he'll try to set things up to repel them. Next time people enter the dungeon, he'll turn up an hour later with five recently-animated zombies, along with any surviving skeletons he can find.
If he wanders down after the party enters the dungeon: he'll drag some coffins to block the the crawlspace and run home and dither, coming back in an hour with the zombies.
If he's in the dungeon when the PCs enter: He'll be in Room 7 behind the secret door. Unless the party is super quiet, he'll hear them and run out of the dungeon as soon as he thinks they've gone into another room. Then he'll do the above.

"Ave Myxylyx" is a level 1 Necromancer with Darkness 15' Radius prepped. He wears a shirt with the leaping reindeer-against-fir of the Jingois family stitched on in fine thread (until he changes into his necromancer duds). He carries a mahogany spear tipped with silver and a crossbow with a full quiver. He's got keys to all the doors and both mausoleums and knows where the secret doors are.
His shirt is worth 600sp, spear 200sp.
In his spellbook, Eyes of the Dead, Repair Skeleton, Darkness 15' Radius, Subjugate Undead.
Has 2 scrolls of Animate Dead left.

I use Excel for room keys usually, makes it easier to take notes and change stuff.
So you can find the room key here.
Loot is in silver standard, read sp as gp if you're that way inclined.
Posted by James Young at 05:52 8 comments: