A sheet of Lorebond effects, bond quests and geasa are here.

The Dwarf is one of these concepts you can't really fuck with. They're solid, both as a species and as a concept.
They're gruff. Short. Husky. Bearded. Live underground. Male. Love mining. All that.

I think this is because there is this same representation of Dwarves across a lot of different media.

You can fuck with Halflings. The simple reason is that they're not in a lot of different media (pretty much just Tolkien and D&D right?), and they're fucking boring. Small contented farmers who smoke a lot of weed and don't do much. Basically that one room mate you had. Or you, you mongrel.
But Dwarves are Dwarves.
You can extrapolate their architecture.
You can make them tortured artists.
You can make them the only survivors of an unknown cataclysm.
But all those innovations and extrapolations don't mess with the solid core that is Dwarf. Good, solid, dependable Dwarf. Which fits. The concept named "Elf" is ephemeral and alive and strange. The concept named "Dwarf" sits in my mind like a lump of stone.
The spelling of the plural of "Dwarf" flip-flops through my mind like a fish that has somehow learned to jeer, but that's by the by.

The only person I've seen to really push the boundaries of what a Dwarf actually "Is" is Tom over at Middenmurk. Recreating them into avaricious fey. But that feels like "Elf" to me! 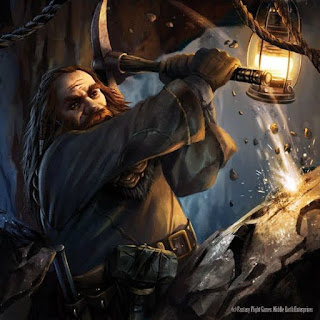 The vast majority of Dwarves spend their lives stolidly working, locked into chains of debt. Work satisfies a Dwarf, much as a good book may satisfy a man. At least, that is what a Dwarf might tell you. Of this I may write later.

It is a rare Dwarf who willingly stares into themselves, reaching inside and pulling apart the lore-fetters. These brave, strange souls are forevermore a step removed from Dwarfish society. Respected, perhaps, but never accepted. A class half empty.

Those who abandon the Dwarf holds find themselves at the mercy of these dark temptations. The strange raw emotions of the surface world, the impossible immensity of the sky, the constant thrum of life. Without monotonous, untiring work a Dwarf might find themselves prone to introspection... and that way lies madness. 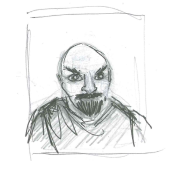 So How Do They Work?

The original idea comes straight from the wonderful Erik Jensen via Santicore 2013.

The full spreadsheet is here.

Essentially, there are several Lores. These include things like Lore of the Beard, Lore of the Brew and Lore of the Forge.
Each Lore has three tiers. You have to unlock the previous tier before you can advance to the next.
To unlock the Lorebond you have to complete a Quest.
Once a Lorebond is unlocked you are saddled with a Geas.
If you break a Geas you are hit by the associated Curse.

As you progress up the tiers you get better powers, harder quests, trickier geasa, and worse curses.
The idea is you can charge up one Lore which is hard and limiting, or mix and match several lower tier Lorebonds which is easier but less powerful.

You progress every second level, if you wish. Obviously you can just ignore this whole thing if you like. 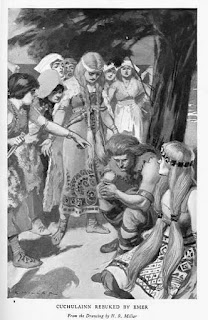 Lorebonds are a strange mix of embarrassment and pride to the Dwarves.
They influence Dwarfish culture, and different Dwarven cities tend to be associated with a single Lore, and more particularly its Geasa.

The Dwarves of Ur-Barakh are associated with the Lore of the Beard.
They never trim their hair, so wear Sikh-esque turbans and keep their beards in rings.
They soak their beards in milk before they leave the home.
When drinking they leave the end of their beard in their drink, removing it implies they need another. They are taciturn to strangers and are careful to never speak to crowds.
If they have to travel, they carry around a small box of plucked eyebrow hairs in neat bundles.

The Dwarves of Ur-Kalladh are associated with the Lore of the Forge.
They are peaceful and known for their craftmanship. Their tools are always of the highest quality.
They refuse to buy or use tools crafted by anyone but their own.
They each carry a bundle that they swaddle with cloth and keep with them at all times.
If angered, they begin to unwrap the bundle. Inside is a weapon.
Ur-Kalladh Dwarves, when arguing or trading, will swap their weapon bundles and begin unwrapping them while talking. Negotiations are complete when both weapons have been bundled back up. If a weapon is revealed, they must fight to the death.
A Dwarf with a small weapon bundle is confident and daring. A Dwarf with a large one is soft or untrustworthy.

The Dwarves of Ur-Darghab are associated with the Lore of the Stones.
They live deep underground in one of the deepest and darkest Dwarven cities.
If they must come to the surface they wear strange hooded Niqabs and wide-brimmed hats. No part of the Dwarf's skin can be seen. They travel only at night.
They carry semi-precious stones and gems with them wherever they go and swallow one with their food at dinner.
They reclaim these stones after they have passed through their digestive system.
They are targeted by humans, for it is said that they shit diamonds.
Sometimes those who come after them disappear. Bodies have never been found.
Posted by James Young at 02:40 2 comments: