While my previous Wizard Downtime rules worked well enough, in the new post-apocalyptic paradigm I've been speeding up the ol' timeline so we'll get multiple years in-game per year of real time.

This is the exact opposite of a lot of games where you'll play for years and the characters only experience a few months of hooning around killing things.

Hence the very important rejigging of Downtime mechanics to taking place in units of weeks and months rather than days. Spend a month off and you'll get 4 weeks of downtime to be used at your leisure. More on that when I've rejigged the rest of the Downtime rules. For now, magic! 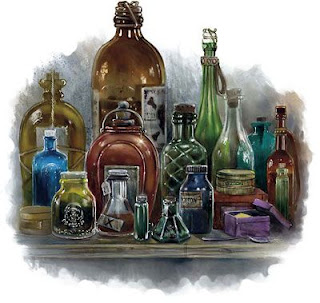 I've spiced this up a bit with some new mechanics, and some juicier potion-making rules that focus on replicating found potions or generating random potions until you get one you like.

Basic Gimmick
You're rolling up to three dice, with the size of each die based on the following factors:

ie. Joe Average the Wizard has access to a library and isn't bothering to spend extra time. He rolls 3d6.
Smarto Richpants the Mage is in a town with no library but pays 300 obols for premium materials, and he's got a +3 Int Mod. He rolls 1d6+1d12 since the Quality is higher but without a library he can't put his superior intellect to use.

Roll and look up the result on the relevant table.

Spells
Add a spell to your spellbook, whether that's via copying a spell you have to hand, researching a spell that already exists in the game, or creating a whole new one.


Potions
Copy a potion you have to hand, or create a random potion.

Scrolls
Copy a spell you have to hand into a Scroll. Anybody can use a Scroll, but most classes require an Arcana roll to use it.
If an appropriate caster identifies a Scroll with an Arcana roll (or the Identify spell), they Decipher it and don't have to use Arcana to cast it.

Over half the current party are Clerics, to my delight. They're very very powerful and have some fun gimmicks.
A potential issue with the well-received new Cleric rules is that Clerics lost a few of their more powerful high level spells - namely Cure Disease and Remove Curse - so these are Downtime things now. Honestly it fits better this way - Curing Disease with a snap of the fingers is a little boring.

Gain 1 vial of Holy Water per level.
Holy Water burns unholy creatures like undead, demons and elves for 1d8 damage.
Holy Water can be stacked 5 to an encumbrance slot.

Miraculously increase the recovery speed of a person suffering from a lingering injury.
Each Hasten Recovery ritual reduces their recovery time by one week.

Treat Disease
Alleviate the symptoms and halt the progression of all diseases afflicting a person.
At the end of the ritual they may make a Save vs Law against each disease afflicting them, curing that disease on success.

Transfer Curse
Remove a curse from a person and place it into another vessel. The vessel can be any object, living or inanimate, but it must be present for the entirety of the ritual.
If the vessel is a willing person the transfer is automatic. Else the afflicted must pass a Save vs Law to successfully transfer the curse.
If the cursed vessel is ever killed or broken, the curse moves to the one who destroyed it.

Sanctify Church
Consecrate a building or structure to become a Church of your faith.
Churches are consecrated ground and painful for wholly Chaotic beings like demons, elves and undead to enter. Such creatures cannot use their supernatural powers within the area, and corpses in the area cannot be animated.
The sanctification lasts as long as the structure is used as a place of worship, or until the Church is desecrated by destroying the altar. 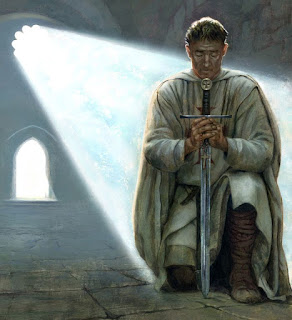 Spells
Some mild changes here on top of the timings, most interestingly - the potential to create a sentient spell! Extremely rare if you've got access to a library, but out in the woods with the hedge witches I suppose these things must be more common...
The other downsides are to make it more in-line with the new Mana rules for wizards.

Potions
I don't have enough opportunities to give players random potions, so here's a way for players to brew their own!
Rather than something boring like "brew a single-target spell you know into a potion", this now creates a random potion, or lets you clone a potion you already have. Much improved!

Scrolls
Deciphering is a bit messy. Basically any class can use any scroll with an Arcana roll. To allow MUs to use MU scrolls and Necros to use Necro scrolls without risk, successfully identifying a scroll means you can cast it without risk if it's on-type for your magic.
Full text for identifying scrolls and wands -
Roll Arcana. On success, you identify the spell.
You also Decipher it if your character class can cast it. You can use Deciphered Spellbooks normally, and cast from Deciphered scrolls as an Action.

Holy Water
Clerics can create holy water for free now! Good for fighting demons and elves and undead, so on-brand for Clerics.

Hasten Recovery
With the new Cleric comes the loss of classic Cure spells in favour of a healing pool mechanic. This does mean that there's no Cure Critical Wounds to heal a broken arm or something, so we've got this activity instead.
A team of Clerics healing one person seems pretty Christ-like. Maybe the disciples were Clerics too?

Treat Disease
A classic Cleric job, but in downtime form. Not much more to say really.

Transfer Curse
I never liked that Clerics could just cure a curse. Curses are fun!
So now there's this, which means a curse must be transferred to some other vessel.
The classic Levitican trick of a Scapegoat will totally work though!

Sanctify Church
A fun one because my campaign is going to have a through-thread of spreading across the world and repopulating it, chiefly by settling new towns in the horrible poisoned wastes. New towns need new churches, and this is how to make them!
Posted by James Young at 04:55 No comments: