I'm putting this up here because I occasionally need to search my own rules at the table, it's almost exactly identical to the original by Joseph Manola which you can find at Against the Wicked City

Alright so, the Extras character class.

Main gimmick - instead of being a single character, you're a gang of unnamed background characters whose collective efforts more or less add up to that of a "real" player character.
Very silly, very meta, lots of fun! 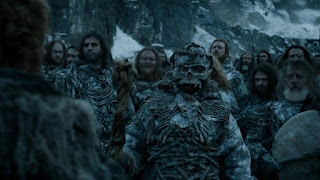 Be this ifYou want to be a bunch of super meta slapstick background characters.
Being the ExtrasSome people are born to be Someone. Singular people, people whose stories will survive long after their deaths. Whether they’re good, evil, or somewhere in between, tales will be told of their trials and tribulations. Their triumphs, their tragedies, their rises from obscurity and their falls from grace.They loom large in the history of the world. Heroes! Villains! Legends!
But this is not you.
You’re the other guys.
AlignmentCollectively, you detect as Neutral.
All for OneYour mob of nameless Extras act mysteriously like a single character in many ways.They have a single HP pool. They have a single action per round. They can carry as much as one man.They also consume rations and ammunition like they were one person. Very strange.
One for AllIn other ways they are very different.They take up four times as much room as a single character. They count as ten men when doing menial labour like digging and rowing.They also count as ten men when buying equipment – you have to buy ten swords or armours or whatever to get the mechanical benefit of just one. Bulk equipment like this only counts as a single piece of equipment for encumbrance and breakage though…If you’ve got less than ten of a thing, each takes encumbrance and the Extras can benefit from the item only once per scene, like the magic sword guy takes a swing as the camera pans past.Named CharactersAt level 1, give one of the Extras a name. This is your mob’s leader who gets a few lines!Once per scene, they get an extra action independent of the rest. Essentially you get two actions that round. Afterwards they get absorbed back into the general mob.Each level you get another Named Character with the same ability, albeit you can only use the extra action ability of Named Characters once per round.
Death of a MobAt 0HP, your Named Characters look around and realise they’re the only ones left, all the other Extras are dead! The Leader survives as a half-health Fighter one level below the Extras’ level, and the other Named Characters are simple 0-level mooks with 1d6 HP.If they make it back to civilisation, they can gather more people and turn back into the Extras! If any of them die before then though, the survivors sorrowfully remain ordinary characters forever more.
Gameplay Stuff

As I say, this is all pretty much direct from the original Against the Wicked City Extras class and all of the reasoning there is intact.

There only minor differences:
The Magic for the Masses rules applies to anything the Extras have less than a full ten of. So if they've got ten swords and one axe, they can attack with swords as much as they want but only attack with an axe once per scene.

For Death of a Mob only one Named Character becomes a Fighter when the Extras hit 0HP, the others become 0-level minions.

-- The Extras in Play

We've had a few Extras characters in the game since they got introduced a while back, the first as a silly test gimmick in February last year and the first "proper" use by a visitor from Australia in October.

As they're such a silly character class, they've seen quite a few wacky interactions with the rest of the rules.

Two things that stand out most:
- "Death" at 0HP means they're much more vulnerable than other classes.
- Failed Career and Retroactive Backstory work real silly and great.

The way my death rules work is that once you reach 0HP, you start getting hit for real. Instead of glancing blows and near-misses, the attacks start to draw blood and bruises.
The idea is that HP is all luck and skill that shields you from real harm, "hit protection" if you will.

But since the Extras split into a Fighter and a bunch of 0-level mooks when they reach 0 HP, they don't have that extra layer of protection. They've got a big 1d12 hit die, but once their health is gone that's it!
No minigame of sitting around holding in your guts hoping for help, at 0HP your Extras are gone (for now) and you're suddenly in control of several individuals.

The other side of this coin is that, on reaching 0HP, a higher-level Extras character suddenly goes from having one action per round to having many. Between your main Named Character, now a Fighter, and all their minion friends, there's a good chance that you can go nova on whatever "killed" you.
Even better, the damage that took you to 0HP doesn't carry over. The Extras can take a ton of damage, plummet to 0HP in one hit, and still survive as a Fighter and their minions!

At level 1, characters in my game roll a Failed Career.
With the Extras, it means that you've suddenly got a whole mob of ex-shepherds or ex-farmers or whatever. A proper mob!
And since an ordinary character starts with a repurposed weapon, the Extras start with enough of them for everyone to use.
An army of background shepherds all wielding shepherd's crooks and rooting around corpses for swords is the best.

The other gimmick is Retroactive Backstory.
For your regular character class, this is so that we the players learn more about a character's past as they level up.
For the Extras, the new backstory is for the new Named Character! This is great because it adds up to an Extras character being made up of a bunch of people with a shallow backstory, rather than a single person with a deeper backstory. Fitting! 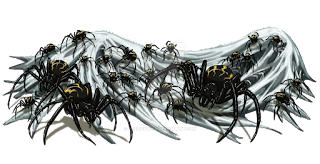 Due to wacky campaign shenanigans, we had a situation where one character (POWERLAD, superhero, only ever spelt in all caps) had "given birth" to a bunch of giant spider babies.
The demon spider mother is now dead and POWERLAD wasn't much interested in raising a brood of spiders, so they were adopted by another character (Sir Robyn, raccoon-appreciating lawyer wizard).

This was all very silly and the sort of thing a long-running campaign throws up organically.
We ended up with a rapidly growing horde of teenage spider-kids, born of a demon spider and an anime character, adopted by a lawyer.

This was all well and good until Sir Robyn's player decided to retire the character for a while, sending him off to research some time travel spells that could help reverse the apocalypse.
"Hey actually could I play as the Spiders?"
A perfect opportunity to play as the Extras!

And so it went for a while. Their leader, Robyn Jr or "RJ", is a weaboo spider who collects POWERLAD manga and has a shitty replica katana. Every level we met another individual shitty teen spiderkid with their own little backstory, and the little gang of spiders continued to grow!

All that ended when a bunch of giant mites devoured most of the spiderkids, leaving RJ and three of his siblings alive.
Only RJ survived...

Which means that suddenly my allegedly gritty low-magic game now has a giant weeb spider Fighter with a katana, who just so happens to be the quasi-biological son of one PC and the adopted son of another.
And it's all because of the Extras and a bunch of ridiculous emergent gameplay.