If You Love Your World, Set It Free

My world is ending.
It's been ending for a long time.
One apocalyptic scenario after another has wracked my campaign. Death Frost Doom unleashed a horde of the Dead. Some shithead's starter dungeon from long ago unleashed the the demon armies from the west. The Mould came out of a weird old lump in the forest, causing societal breakdown due to the increasing numbers of mould addicts.

All things that could take over the world, maybe ruin a part of it.
None of them would destroy it.

The Beast in the Core of the Earth is the World.
And it is rising. 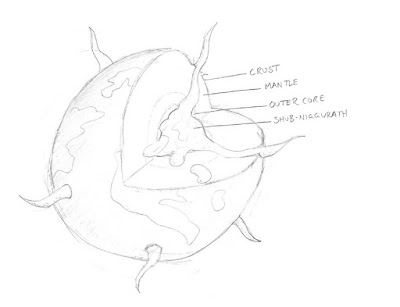 This is pretty exciting! I guess I've always had the end of the world in mind in my game, or at least  willingness to let vast swathes of it get destroyed/impacted/changed by various perils. Running LotFP adventures will do that to you.
But despite all that, this is the first time I'm straight up looking at the end of the entire world.

It's no doubt a reflection of my own vague nihilism that I've ended up with this "ha ha life on earth was some meaningless cosmic accident" apocalypse. The rise of Shub-Niggurath from inside the Earth was always intended to be my version of the Lovecraftian menace that doesn't give a shit about you because it works on spans of time far beyond human comprehension. It's not some epic battle of good and evil, it's not someone with great power getting corrupted absolutely, it can't be reasoned with or stabbed to death, it just is.

And while I'm sure lots of high level D&D campaigns have featured world-threatening events, there's usually something you can find or someone you can kill to prevent it.
I don't know how my players are going to prevent this one, honestly. I sure hope they pull it off though. It'd sure be nice if they saved my world for me!

Maybe the biggest part is just being able to step back and say to myself, "you know what, it's been like 6 years in this one little patch of planet. Am I ok with it getting blowed up?" and yea, I guess I am. It'd be pretty cool.

For the record, this final apocalypse, as with all prior lesser apocalypses, was triggered by the players. They cured one doom, only to unleash another. Such is the way of things! 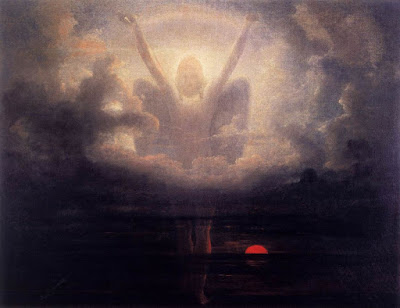 Saving the World with 10HP

I've saved the world before in lots of games. DnD once or twice, and certainly a heap of times in video games.
Kill monsters, level up, get sweet loot, kill more monsters, and eventually become strong enough to kill the big bad. Classic.

Except my campaign reeeaaally isn't set up for that. Characters die with some frequency, new characters come in at level 1, and getting as high up as level 6 takes like a whole year.
Getting strong enough to kill the locus of the apocalypse is straight up not the way this thing is going to work out.
So how are they going to do it? Especially since there's no real way to out-fight a world-cancer even if they were a party of One Punch Men?

So far, it looks like the plan is to exploit other world-ending threats and daisy chain a solution to the apocalypse. Get an apocalypse dragon to defeat Shub-Niggurath, then use the unstoppable hordes of undead to defeat the dragon, and so on and so on.
The "There's a Hole in my Bucket" world-saving gambit, essentially.

I fucking love this.

All these different factions have been around for a good while, my players have been in my game for years so they know them pretty well. And now they've got a cause to try to unite the warring clans to prevent the end of everything?
Fuck yea!

Ordinary people saving the day through sheer luck and guile and straight up diplomacy is completely my jam. My whole game is pretty much the story of a party of plucky fools with a few extra abilities making the best of bad situations, forming relationships, and doing their best to get rich without dying trying. Somehow the whole game has been leading up to this, and it works!

There's also the very real possibility that my players will find some way to bullshit or edge-case their way out of this thing. They usually do. No doubt there'll be some artifact somewhere, or some bullshit ability they gain, or even some random object someone has in their inventory right now that will change things up massively.

Basically, instead of ramping up the power level I'm going to try to keep that low-power high-lethality gritty fantasy feel going.
If the world dies, it dies. But man, my players sure seem like they're going to give Shub-Niggurath a run for its money. 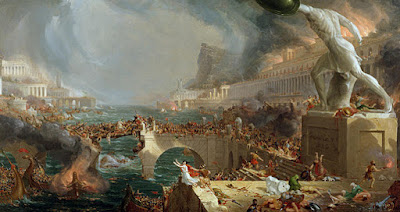 Some tools I'll be using to throw my whole world into the shredder.
Posted by James Young at 05:44 3 comments: