So I Ran Castle Gargantua... Poorly

After Kabuki Kaiser gave me a copy of this thing to review moooonths ago, my players finally decided to check it out.
And, basically, I fucked up. And not even in a good way.
If you want to know how to run something into the ground and waste a lot of wonderful potential, read on.

How not to run Castle Gargantua:


Assume the random generation gimmick means you don't need prep
First off, running this thing was sprung on me by the players at short notice.
I already had a big fuckoff tower on the map that nobody had ever gone near. Since nobody had ever gone near I'd never bothered stocking it beyond a vague "yea this is a big Skaven tower" idea. When Kabuki gave me a copy of his megadungeon I looked it over and thought "sick, randomly generated thing. I can slap this down here for now and look at it properly when the players start to get close".

Long story short, the players got their hands on the giant eagle from Deep Carbon Observatory due a lucky Halfling mind control roll. It being said Halfling's last session before she moved back to Portugal possibly forever, the party decided they should use this brief power of flight to explore somewhere they'd never been.
"How about this giant tower?" said one person, pointing at a potentially interesting giant tower on the map.
Ha ha yea ok let me load this thing up ha ha yea give me a sec.

Reskin it on the fly
The best time to reskin something is when you've only ever glanced over the contents once, and also when the thing you're reskinning is intended to be a megadungeon that could be the tentpole of a campaign.
And also when you're trying to reskin a grandiose gothic gigastructure filled with stone and bone and blood and lust into... a strange tower inhabited by ratmen.
Just waste all the goodness of the strangeness and replace it with fucking rats.


Don't print out the helpful stuff at the back
Hey you know how there's some helpful stuff at the back to help you run the thing? No? Well there is, and it would have been veeery useful in terms of both keeping track of the place as it increased in size and complexity and maintaining a consistent Castle Gargantua between sessions.
Anyway, don't see that. Don't even look at that. Don't go anywhere near the back when you're running it. Great policy.
And you know how there's a list of one-word room and chamber descriptions per area? Different types of room to sell the theme of the zone? Keywords for you to use as general descriptions when people enter a room and cross off as they're used? Don't use those either. Just a giant version of a generic stone walls stone flagstone dungeon. Nothing of note other than bare stone walls. Fun.

Don't tell the players you're rolling as you go
Rather than letting the players know that this is a special dungeon with an interesting roll-as-you-go gimmick, try and hide it. Give them the impression that this is all written down somewhere and it's just like a normal dungeon.
They won't be able to tell, certainly not. The process of divining the dungeon from the dice, rather than being an enjoyable experience, should become a race against time to roll and find results and put them together in your head while you scroll to the descriptions of anything out of the ordinary.
The clatter of a handful of dice behind your hand or screen? Pay no attention to that man behind the curtain. Your players won't pick up on the clatter of countless dice at all. Your players sensing your discomfort and trying to help by asking about dungeon details to expand the shared perception of the environment? That's just more stress on top of the rest of it. Breathe fast.
Oh and remember how I said don't print anything out? Yea, just keep scrolling back and forth between the list of results and the descriptions. While trying to pretend everything's written down in a regular room description. Do that. 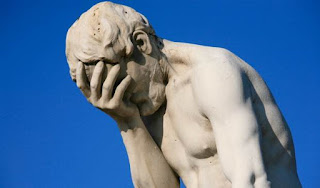 So is it good?


The worst thing about running it wrong was that I could see hints of how I should have done it. Dungeon generation via dice is a cool thing which I'd quite like to try out properly. But as with anything if you're bad you can mess it up, as I found to my eternal shame.
The other thing is I tend to review things only after I've run them, which I think is an ok gimmick in a world where you're reviewing something that only really becomes real when it's used in play, but if I have a bad experience is it the fault of the product or the fault of ME?!

So hell, you now know how and why I messed it up. Let's try something new.


Why I think Castle Gargantua should have been good and unique and interesting as an experience but wasn't because I messed it up and all.


The Sheer Size
Gargantuan castle with huge ceilings, enormous rooms, and a scale of 60' per square? Unheard of. That scale means that the party's torches don't even reach the edges of the tile.
I've got a few megadungeons in my collection because I have a problem, but they're all in the rooms-separated-by-10'-wide-corridors vein. A dungeon at a scale this huge is craaaazy.

Thematic Differences
Speaking of megadungeons, I've spread them around my map and each has a distinct feel.
Stonehell is classical dungeon crawling, easily reskinned and primed for ease of use. This is what I imagined Castle Gargantua to be before I dived into running it.
Dwimmermount is full of history, history about itself and a history of the world which I felt compelled to massage into my own campaign. Dwimmermount is about discovering knowledge.
Barrowmaze is a relentless delve into a world owned by the undead, with the interesting distinction of spreading outwards instead of downwards.
The Castle of the Mad Archmage is the a-wizard-did-it dungeon of deadly whimsy in the Gygaxian style, with wacky traps and strange rooms and an intrinsic unpredictability. It doesn't have to make sense.
And then there's Castle Gargantua which SHOULD have been a baroque and intense megadungeon where the very walls of the echoing halls and cavernous corridors foreshadow the strange sights to be found within. It SHOULD have been a dungeon where each themed section had its own life. Walls bleeding wine as grape-faced guards step carefully through drug-fuelled orgies, blood-soaked barbarians battling in their own private Valhalla, cyclopean statues hewn from the walls of vast and echoing halls. Enter a Lust area and you can tell, from the furnishings, that this is a place where you should be careful of temptations and too-good-to-be-trues. Themes that allow players to predict dangers despite the weirdness, strong themes that set the dungeon apart from others like it.
Instead, swiftly reskinned mole rat people. Great.

The Main Gimmick
I might not have actually said this yet and just sort of implied it under the assumption that you know already, but the main gimmick of Castle Gargantua is that it's set up as a series of themed zones.
Most of these zones don't have traditional maps, and are instead randomised by throwing a handful of dice as the party leaves a given room.
The zones are Stone, Lust, Blood and Wine, each with appropriately themed set dressing and challenges, while special Gold zones feature actual keyed maps and actual keyed room descriptions.
Finally, travel between the zones is in the form of a snakes and ladders setup. After travelling through an arbitrary and DM-decided number of rooms (the default is four), you roll a d6 and the party travels that many zones on the game board.
Now I already love Snakes and Ladders as a game gimmick, but this sounds especially interesting due to its effects on how the game plays out. It takes one kind of map agency from the players ("We should avoid the northwest corner because spiders, but I don't thing we tried east yet") and replaces it with another ("That's two rooms we've been through, do we want to go through another two or head out?").
I'd be inclined, after my experience of trying to hide the gimmick from players, to just let the players in on it completely. Give them a printout of the Snakes and Ladders board and tell them how it's going to work.
How does this pan out in play? No idea! But I'd really like to find out for myself.

Interesting Impacts Yet Unknown
Just like having Snakes and Ladders instead of a traditional map alters gameplay and player agency in a way I'd be interested in discovering, there are a few other unknown effects of rules that I can see maybe happening.
For instance, monsters being bigger (and thus, more powerful) based on average party level. It initially sounds like the sort of challenge-rating balanced combat hokum that I wilfully fled from when I stopped running 4th ed and embraced the loose imbalance of the OSR.
BUT my assumption is that, like the rest of the castle seems to be, once it's been generated it stays that way. This would seem to imply that as the characters explore the castle and level up, the enemies get (literally) bigger and nastier. And THAT means that you maintain the classic megadungeon how-deep-in-do-we-go gameplay, while also having the interesting implication that once a party levels up enough they'll never generate smaller "normal sized" enemies when they enter a new area. They're only going to find the bigger ones.
Unless, that is, the players roll up some lower level woobies and go in to explore.
Which is weird but maybe fits if you play up the fairy tale aesthetic? I want to find out the implications of these things, man! I want to see how it plays properly! 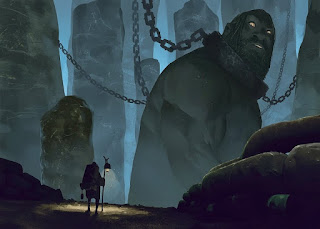 I didn't run it good. It looks like it could be very good.
I'll probably do a second review after the players go back, except this time I'm going to use the aesthetic as intended and not try to reskin it.
Really the main advantage of trying to run it was seeing the horrific amounts of squandered potential at play here. I SHALL RETURN.
I am going to solve my problems by placing pouches of magic beans and/or scrolls of Engorge Beanstalk and Anchor Cloud Castle in treasure keys until the party finds one and uses it.

Should you buy it? Yea man.
But learn from my mistakes and run this thing right.