Every elf was once a human. Each experienced the touch of the Fey Folk as a child, though this experience differs from person to person and elf to elf. Some are plucked from cradles in unwarded rooms or are the children of women seduced by the fey, others play too long in fairy circles or witness things unknowable through frosted windows when up too late. In each case, a spell is planted upon their heart, dormant and waiting.
Often the circumstances are forgotten as the child grows, justified to themselves and their peers as dreams or overactive imaginations, but as the child reaches maturity strange coincidences and unexplainable phenomena start to manifest in their daily lives. The spell planted in their heart begins to fill their blood and bone with magic, growing ever stronger, until one day the child learns to harness the power of their heart-spell.
This is usually discovered during puberty under times of strife or duress.
Eventually as the elf grows in power their otherworldly nature overcomes their humanity until the person is gone and only the elf remains.
The final form of each elf depends on their heart-spell. These final forms are detailed here.

Heartspell sounds really lame though, like it should be the title of a torrid romance novel or something. Any input on improvements is appreciated.

A new elf character has only knowledge of their heart-spell and Read Magic. They may use spellbooks, although they begin play without them.

They can swap any spell for their heart-spell as they cast it.

If they cast all of their spells for the day they look entirely human. Otherwise, they look increasingly alien for every spell they have in their head.

One memorised spell in any type of elf causes the ears to go classically pointy and leaf-shaped. This is because I haven't worked out what happens at each level for each spell yet, and don't plan to do so until it's immediately relevant, but suffice to say that it will be related to the spell in their heart.

Save for the pointy ears thing, each mutation will be associated with a benefit.
For instance, a second level Light-spell elf with two spells in their head might have infravision and glistening eyes. Cast one spell and you lose the glistening eyes and the infravision. Cast your second spell and you lose your pointy ears and can pass as human without having to wear a hat.

They instantly regain their spells in the light of the moon, but lose their minds and cavort and moon worship and gallivant and scare good god-fearing folk for one hour per level.

Their powers wax as the moon wanes.

They do not need to sleep.

They fear cold iron, for its touch makes them unable to use their magic for 1 round per spell level still locked in their heads.

They cannot pass thresholds warded with cold iron (such as doors hung with horseshoes) unless they have no spells left and as such are functionally human.

Cold iron is simply pure iron that is cold to the touch. It is not iron forged without heat or iron mined in the depths of the world or anything silly like that. Elves themselves tend to use blades of steel if trying to blend into human society, or elf-forged blades of bronze if they do not care for Man.

They do not age unless all of their spells have been cast.

Eat the heart of an elf and you gain its bone-deep mastery of its heart-spell and a measure of its longevity. On the night of the New Moon, the Wyld Hunt will come for you. 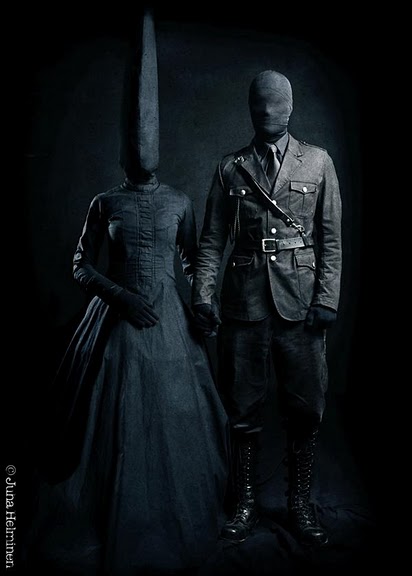 I have quick class breakdown sheets for my players, it makes it easier for them to pick a class in a hurry after I've ripped up their sheet.

Here’s my new breakdown for elves.

Be this if
You want to be a changeling slowly losing your humanity, able to both fight and cast magic.

Being an Elf
If it is true that the average man fears the Wizard, then it is also true that he is terrified by the Elf. For elves are magical beings down to their bones and blood, changeling children stolen beneath the blind eye of the new moon and bewitched by charms and bonds both gentle and vile. They are terrible, and beautiful. Dark kings in their dark courts. Half-glimpsed shapes and shifting colour. Crow-beaked shadows. Shining eyes. Fear in your throat as you stumble home in the moonless night.
But this is not you.
This is what you will become.

Alignment
You detect as Chaotic.

Spells
Each elf holds a spell in his heart, cut it out and you’ll see. Roll a d20 and tell me the result. That is your heartspell, it defines what you are and what you will become.
You do not sleep, but every night at moonrise you must spend an hour or more cavorting and yammering in the moonlight to regain your spells. At first level you can channel one spell per day.
You can’t have two of the same spell in your head at a time, but you can cast your heartspell in place of another spell at any time and you can flip a reversible spell on casting.
Your powers wax as the moon wanes.
Spells take a round to go off. Declare that you’re casting at the start of a round before initiative is rolled, the spell goes off at the end. If you’re interrupted mid-cast the spell goes wild and you release a Chaos Burst. Pass an INT check to wrestle it back under control and maintain casting.

Changeling
The magic inside you is transforming you from within. For every spell you have memorised you gain more and more otherworldly characteristics and abilities, you lose them as you cast the spells. An elf with no spells is human once more, at least until the next night.
The first characteristic for all elves is pointed ears, lending you a 2 in 6 Search skill. Further markings and abilities depend on your heartspell. Further markings are harder to hide.
Cold iron is elf-bane. Its touch mitigates your magic and dulls your senses, giving you -2 to attacks and making you unable to cast spells for as many rounds as you have spells left in your head. You cannot pass thresholds warded with cold iron (such as doors hung with horseshoes).
Neither of these limitations apply if you have no spells left and as such are functionally human.

Taken and run with via Middenmurk.
Posted by James Young at 00:55 2 comments: