It's been more than six years since I added the Barbarian class to my game, and in that time we've had a fair few of them!
Unfortunately they've rarely used their iconic Barbarian Rage ability. Something had to be done!
So here's a pair of abilities that synergise nicely, and encourage Barbarians to throw themselves headlong into battle... 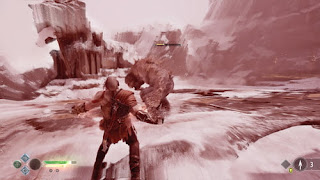 Rage
You can go into a Rage at any time.
You deal increasing amounts of damage as your rage grows, but the angrier you get the harder it is to stop!

Death Trance
When you're at 0 HP you enter a Death Trance.
The more hurt and/or enraged you are, the more attacks you get.

Rage + Death Trance
Together this means that a raging Barbarian in a death trance gets fuckloads of attacks and deals fuckloads of damage and will keep killing until everything stops moving.
Great for killing big monsters. Extremely great for dying gloriously. Extremely scary for everyone around you if you sink too deeply into battle-madness and go berzerk!

For ease of explanation and cross-compatibility I'm going to call the core mechanic "Rage Points" here.
Assume Rage Points last until you leave a Rage or combat ends.

You must attack during a Rage.
You lose 1 Charisma every time you could take an Attack action and don't.
If you reach 0 Charisma you lose your mind (and your character) and murder everything in sight.

Rage is overwhelming and calming down is difficult.
As a Standard Action, or for free when you kill a creature, you may attempt to calm the fuck down.
Save vs Doom, with a bonus equal to your level and a penalty equal to your Rage Point total.
On success, your Rage ends.

Note: Using an action to attempt to calm down is a non-attack action, so if you fail you'll lose Charisma. Best to sate your bloodlust by killing something...

At 0HP you enter a Death Trance.

While in a Death Trance:
- You gain a Rage Point every time you take damage.
- You gain an extra attack per Rage Point.
- You cannot be knocked out, put to sleep, or otherwise made unconscious. 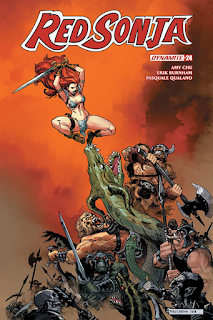 On the other hand, having tons of Rage Points is awesome up until you have to leave your Rage. If you're unlucky you'll get sucked down into a spiral of violence where you murder all your friends!

Moving Rage from a limited use resource to a building spiral was spurred by a conversation on the Discord with Great_Job, Chuffer, Rook, and some others.
Great_Job brought up that a Rage is usually presented as a resource management mechanic rather than evoking the "somewhat fluid, emotional nature" of losing yourself to anger, which is totally true!

Heavy inspiration from Great_Job's take on a rage monster PC: The Accursed. 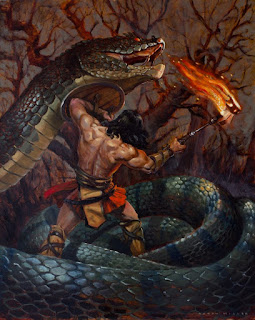 With the all-important Rage and the Death Trance out of the way, here's the rest of the Barbarian's cool shit.

Unique:
Barbarian saves and attack bonus don't advance normally.
Instead they roll twice on this Barbarian Powers table each level!

Bare-Chested:
Barbarians cannot wear armour, but they have a natural AC of 14 due to Barbarian luck and God-favour.
Despite wearing barely anything, Barbarians always count as protected against extreme weather.

Party Hard:
Barbarians are great at carousing.
The Barbarian, and anyone who chooses to Carouse with them, doubles how much they spend while carousing (and thus, doubles how much exp they gain).
However when they Save against carousing mishaps, they roll the save twice and take the worst result.
This stacks with multiple Barbarians. Two Barbarians means triple spend but roll three times and take the worst, and so on. 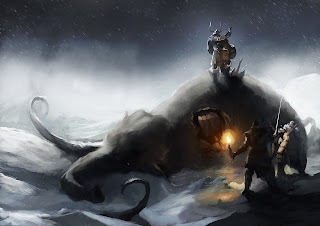 Barbarian powers are cool and comfy at this point.
Everyone likes the wacky unique stuff like Charisma armour or crit range improvement, but you might notice that even the "boring" results - attack bonus and Save improvement - are indirect improvements to Rage. Attack bonus means you actually hit with your high damage rage attacks and Save bonus means you break out of Rage easier. Pretty sweet!

Low armour fits the Barbarian theme, but also serves as a way to separate the Barbarian from the other combat class - the Fighter.
Fighters can wear heavy plate, Barbarians are usually stuck with 14 AC. Low armour and a Rage mechanic that makes them easier to hit means they'll get knocked down to that spicy Death Trance easier!
Natural protection against extreme weather is important for my post-apoc weather stuff. I dig the idea that Barbarians can walk around in furry shorts while everyone else needs a full body suit!

Barbarians carousing is another thing that's seeped into the group lore, I really liked the times the rest of the group was like "uhhh no actually I can't afford to party with the Barbarian we'll carouse later".
I kinda picture Barbarians as being somewhere between That One Friend who first got you drunk when you were a teenager and That One Friend who insists on going to a club even though you're old now and it's past midnight and you've been feeling a bit tired since 7pm.
Either way you're going to find yourself staring at a toilet bowl asking yourself why you agreed to shots.

Yo what happened to punching ghosts?!

If you've been in my game for a while you might notice that the Barbarian has lost a few things they used to have as standard.

Long story short, both "fists do d4 and can punch ghosts" and "eat spells cast on you on a nat 20" are on the random Barbarian Powers table now.
This is largely because Barbarians get lots of wacky powers already, and keeping track of these and the random powers and abilities from backstories was quite a lot! 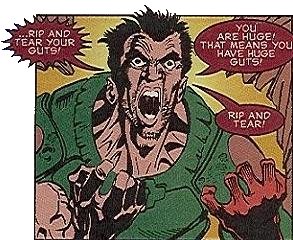 So that's the cross-compatible version above.
In my game I've integrated this into my Death mechanics.

It's maybe a bit too mechanically cute, but it's my game so whatever! I can regret it later!

So my death system basically works by giving you Death Tokens at 0 HP.
Mostly this is Pain Tokens which might make you pass out, but you can also get Bleed (damage over time) and Trauma (risk of death).

In this version, Pain Tokens are used as Rage Points.
This has a few fun mechanical implications!

Same exact concept as above, but here's how it works in the Death Token version:

Entering a Rage takes an Action.

You must attack during a Rage.
You lose 1 Charisma every time you could make an Attack and don't.
If you reach 0 Charisma you lose your mind (and your character) and murder everything in sight.

Rage is overwhelming and calming down is difficult.
As an Action, or for free when you kill a creature, you may attempt to calm the fuck down.
Save vs Doom, with a bonus equal to your level and a penalty equal to your Pain total.
On success, your Rage ends.

Note: Using an action to attempt to calm down is a non-attack action, so if you fail you'll lose Charisma. Best to sate your bloodlust by killing something...

At 0HP you enter a Death Trance.

While in a Death Trance:
- You gain an extra attack per Pain Token.
- Pain does not add to your rolls on the Death Table.

So this version uses Pain Tokens but is functionally the same as up top.
The fun part is that this has fairly interesting mechanical effects!

Some examples:
- Pain Tokens don't add to death table rolls so you tend to shrug off minor wounds. Like even if you're at zero with 5 Pain and get hit for 6 damage... you "roll" 0d6+6 instead of rolling 5d6+6. Life saver!
- Clerics can heal Pain Tokens. Might be fun to sabotage an enemy Barbarian by healing them, or use God's mercy to calm the soul of your angry Barbarian friend before he murders you all.
- When the Rage ends you've still got a bunch of Pain Tokens, so could probably pass out after your Rage.
- Food heals Death Tokens too, so a Barbarian who's come out of a rage will be H O N G R Y.
- Poison is Death Tokens so you're literally immune to poison during a Rage.
- Drink Pain Poison to hype yourself up!?

Hopefully it is fun! Someone persuade Ollie to go into a rage so we can see what happens. Would be real funny (for me...) if Zulu murdered everyone in a rage-fueled accident! 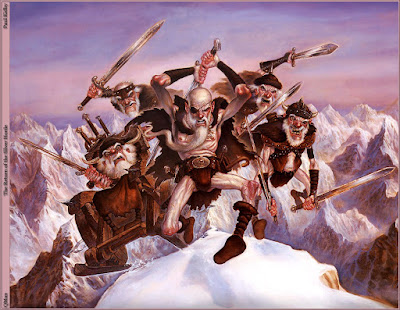 Special Abilities
Unique: At first level, and every level thereafter, roll 1d100 twice on the Barbarian Powers table.
These can be anything from +1 to hit to intimidating hostile beasts to boosted crit damage.
Bare-Chested: You can’t wear armour (it’s for the weak) but you have a natural armour class of 14 due to luck, the favour of barbarian gods and/or protective tattoos.
Despite wearing not much at all you always count as protected against extreme weather.
Party Hard: You party really fucking hard. The whole party rolls double for carousing when you’re around, and when they save against Carousing mishaps they roll twice and take the worst.
This increases with multiple Barbarians - triple for two, quadruple for three, and so on.
Death Trance: You are an absolute monster when you are close to death.
While at 0HP, you enter a Death Trance where you attack in a frenzy and shrug off minor wounds.
In this state you gain an extra attack per Pain Token, and Pain does not add to your Death Table rolls.
Rage: In battle, as an Action, you can hype yourself up into a Rage.
Pain fuels your Rage - each Pain Token grants you +1 to melee damage and -1 to AC.
You gain a Pain Token whenever you hit a foe in melee, growing your Rage.
You lose a Pain Token whenever you hit a friend, slowing you down.
While in a Rage you never Tempt Fate due to Death Tokens, so you never have to stop fighting..
To stop Raging is difficult. As an Action, or when you kill a creature, you can attempt to stop your Rage by passing a Save vs Doom. You get a bonus equal to level and a penalty equal to your Pain total.
You must attack in a Rage. You lose 1 Charisma every time you could make an Attack action and don’t.
If this takes you to 0 Charisma you lose your mind (and your character) and murder all in sight.

And the full Barbarian Powers table

In case something happens to the Google doc! 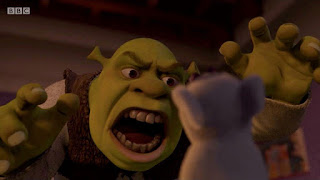