Clerics are weird. This is known.

They're basically just religious wizards with a thematic spell list and a heal-bot reputation. Most of the time they're there to heal and maybe occasionally use a more interesting spell like Command.
I've never been quite happy with them, but adding a bunch of spells per religious denomination helped a little.

This is taking it a step further. Fuck the spell list. Fuck spells per day. You're not a wizard, you're a warrior-priest! Let's get faithful! 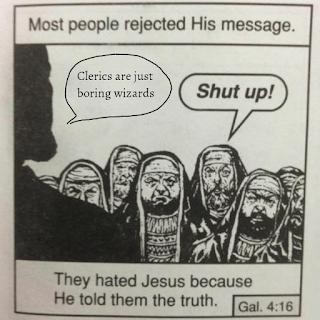 (This is part one. Part two can be found here!)

A standard Cleric.
Should hopefully be easy to add/swap into whatever you're running with minimal fuss.

Miracles: All Cleric spells are called Miracles now.
Healing spells like the Cure family no longer heal HP, but can still be used to cure paralysis or mend broken bones or whatever else they can already do instead.
You can cast any Miracle that would have access to at your level (eg. a 5th level Cleric has access to 1st, 2nd and 3rd level Miracles).

Calling a Miracle: Calling forth a Miracle is a normal Action - the Miracle is cast instantaneously.
After you call forth a Miracle, roll 1d6 per spell level and attempt to roll equal to or less than your current Faith total.

Observances: Each Observance is an act that will cause you to gain or lose Faith.
Observances can be triggered once each. When you make a successful Miracle roll, this resets so you can be affected by each Observance again. 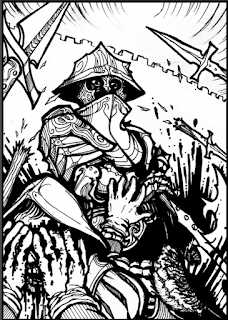 So that's the Generic Cleric.
I've got special stuff for different religions (which is the stuff I'm most stoked about) but I cut it down to one standard Cleric to really show what I'm going for here:

- Retain status as the Healer class.
- Encourage use of non-Cure spells.
- Reward Clerics for following their religion.

In my game to date, Clerics would often avoid using a more interesting spell because they didn't want to waste a potential Cure Light Wounds.
This was alleviated slightly by giving them a Denomination Spell, but not by much.

Honestly a Healer class is a solid niche, I can't fault it from a gameplay standpoint. It's just that sometimes it feels like that's all a Cleric is.
Plus there's the social impact - "wasting" your last spell of the day on Command or Detect Evil is sure to get you moaned at by the rest of the party when someone gets shanked in the lung.
So why not just make healing a separate ability to spellcasting?
Everyone gets heals, the Cleric gets to use cooler spells, it works!

This is the core of Cleric spellcasting now. Note that there's no possibility of failing to cast the Miracle - it always goes off regardless of the Faith roll.
This goes back a ways to the idea that Clerics are reliable.
There might be a possibility that this Miracle is your last one of the day, but there's no question whether you can cast it. This is also why it's a normal action instead of a full round of spellcasting - you can't be interrupted.

You may notice it's a little janky in regards to starting Faith (1d6/Cleric level) and rolling when you cast a Miracle (1d6/spell level). Yes, even if you have a million starting Faith, a single level 1 Miracle will set your new Faith total to 1-6.

This is because the "real" version is slightly different (coming sooooon....?).
But then, as is, this version of the Cleric is encouraged to start off the day using higher level spells (while they still have high Faith) and work their way down to the lesser spells as their Faith total declines.
You could justify this thematically though. You don't hear about Jesus throwing out a few Commands before he whips out a big Cure Disease or Create Food and Water.

Also a level 6 Cleric can cast infinite Level 1 Cleric spells, since minimum Faith on a successful roll is your Cleric level.
It sorta works - in my game the maximum level soft caps at around level 7, so why shouldn't a high level Cleric be allowed to throw around as many Commands and Detect Evils as they like?

Observances are the fun one, cribbed from the Dragon Worship rules which I cribbed originally from Perdition.
The intention is that a Cleric can cast a Miracle, get a new Faith total, then farm it back up with Observances in order to ensure they succeed at their next Miracle roll.
This means a Cleric who's careful with their Miracles and devout in their faith is unlikely to run out of spells per day.

On the other hand, if you spam Miracles you don't have a chance to build up more Faith in between times, so you'll likely run out sooner.
Worse, if you're a taboo-breaking Cleric who triggers the negative Observances, you'll lose Faith and likely run out of Miracles even sooner.

D&D has always had the much-maligned and debated Paladin falling mechanic, so this is a soft version of that. Plus it's codified so you can't get fucked over by a DM who pits Paladins against the trolley problem. 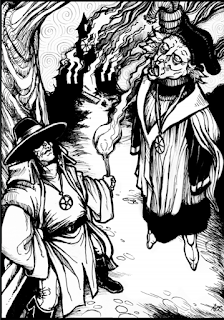 But James! I hear you cry. This is a bit shit! Those Observances only work for a generic psuedo-judeo-christian paladin-type Cleric! What if my deity is the God of the Woods? Or the Moon? Or the Turbo Dragon Jesus?

It's a simple fix my friend.
If you have any special Cleric spells per religion, add them into the Cleric's spell list.
Then simply change the Observances to fit the Cleric's deity - working with the player if you want to be nice and collaborative.

Here's my guideline for new Observances:

Negative:
-1: An easily avoided act.
-1: A harder to avoid act.
-1: Harming a follower of your own or a related religion.
-2: Inverse of theme - the opposite of what your deity is about


And some examples, which may make more sense with an ensuing post:

Further reading:Miracles, Holy War and You!
Posted by James Young at 07:36