This one's for Catalessi of Unreal Star.

I was gonna try to do all three but I've been travelling across the world for the past week, sorryyyy!
I did a monster though, and at least it's illustrated I guess! 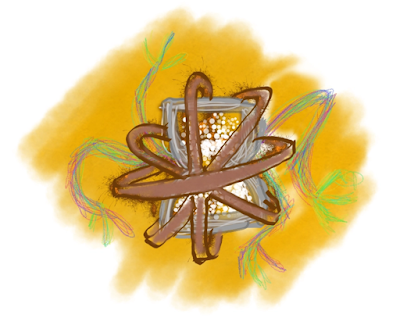 A large fat sandglass filled with pure white sand, encased in a spinning rings like an orrery. Pearlescent hands formed of bands of coloured sands reach out from around the sandglass and spin the orrery mesh.
It floats through the air, softly spinning, the armoured orrery-case opening itself more and more as the timer runs down, allowing the nacreous sandy limbs a better chance to blast at foes.

The sandglass itself flips every 30 seconds.

On the first round after it flips, it has 18 AC and +1 to hit.
As the sand trickles down, it loses 1 AC but gains +1 to hit at the end of each round.
On the 5th round it has 14 AC and +5 to hit, and the sand has trickled into the lower bulb. At the end of that round the Powerglass flips, deals 1d10 damage to anyone in 20’ as the hoops of the energy-mesh blast out and fly around and reconfigure, and becomes 18 AC and +1 to hit again.

It attacks with blasts of temporal sand from its writhing hands. 1d6 damage and the target disappears - blasted forward in time. They will reappear when the Powerglass next flips, possibly very confused.

Ideally the Powerglass wants to blast a few people into the future, then get close to where they’ll reappear so they get hit by the AoE when it flips.


The Powerglass is summoned by time-thieves to support their temporal endeavours. The Powerglass is a unique creature, but time-thieves often have a few that they’ve stolen from other timelines.
Time-thieves can appear in any place at any time, usually in groups of themselves. Getting the Powerglass to blast people into the future tends to give ample time for them to grab whatever they’re stealing and go.

Email ThisBlogThis!Share to TwitterShare to FacebookShare to Pinterest
Labels: monsters