Secret Jackalope is like Secret Santicorn but for Easter!
Which I clearly missed, but I did it in the end!
So here is my somewhat belated Jackalope gift for Mr. Florent "killerklown" Didier of D.R.E.A.D. who requested:


I already did this in my Titan-Scale Mass Combat rules, but just linking back to that feels like cheating!
So instead I'm just going to adapt it to something more human-scale, such that PCs will be able to affect the outcome on the battlefield rather than just commanding from above.


So the main thing is that the PCs need a goal that isn't just "roll attacks against enemy soldiers".
If they're just in the rank-and-file they have no agency and no real means to affect the battle - they're just another soldier, even if they're like ten times better at killing than a regular soldier.

More importantly they need several possible goals so they have agency.
Flashpoints are these goals - points where the PCs can influence the course of the battle. 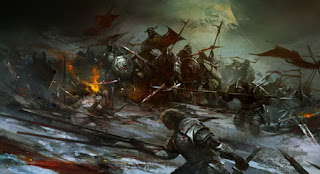 Every good scenario has an outcome that is essentially "what happens if the PCs don't intervene?"
Set that now.

A good idea is to just grab a famous battle from wikipedia and use that!
Good for "realism", good for one of your players picking it up and going "oh sick I know exactly what went wrong in the Battle of Cannae!" and feeling cool for using their historical meta-knowledge.

This is also good for working out the terrain and the power imbalance between the two sides, less work for you is always good right? 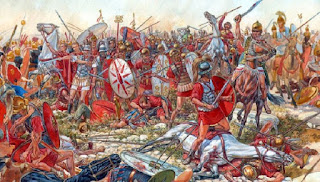 Battles are fought by Units, representing formations of troops.
Battles take place on a hex grid Battlefield.
The PCs can influence the battle by going to Flashpoints, places which could tip the balance of the battle in their favour. 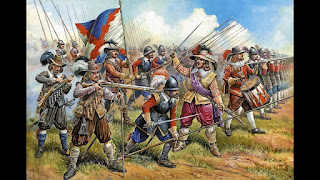 Armies are made up of individual Units, each representing a single formation of troops.
They have two stats - Speed and Power, and perhaps some extra bullshit special abilities.

Combat:
Each side rolls their combat die.
The Loser loses 2 Power, dropping down a die size.
The Loser may move a hex, if able.

If a Unit is at 4 power (ie. uses a base d4 for combat) and loses a combat, they are destroyed.
Survivors may flee, if possible, as a useless noncombatant unit.

Bullshit Special Abilities:
These are some extra bits to differentiate units and make them a bit more characterful.
Some possibilities:
Charge: Move an extra hex when you move in a straight line.
Riverwalk: Can cross water without a bridge.
Overrun: When you destroy another unit, move into their vacated hex.
Ranged: This unit can attack from 2 hexes away, but has -2 Power in normal melee combat. If they lose in a ranged combat against a non-ranged foe, they take no damage.

Distance
The Battlefield is a hex grid. Each hex is as big as you need it to be.

Timescale
Each Turn is anywhere between 10 minutes and an hour - time is flexible in the midst of combat.

Terrain
Add some terrain to spice up the battlefield. Some possibilities:
Elevation: Units with the high ground gain +2 Power.
Slow Terrain: Units that move into this terrain end their movement.
River: Impassable to normal troops.

Flashpoints are places where a small and dedicated group of 2-8 characters of appropriate level might make an impact.
Think of Aragorn and Gimli defending the gates from the battering ram at Helm's Deep, or what would have happened if Legolas had actually taken down that one guy with the torch before he could light the bombs under the walls.

Whenever two enemy Units engage in combat, a random Flashpoint occurs.
PCs that arrive in time can enter the Flashpoint - essentially a short combat scenario that affects the course of the combat.

These can basically be any cool combat battle scenario you can think of and you'll need to stat them up appropriately, but here's a d10 table to start you off!

1. Enemy Champion
A very strong foe is here! A big monster, a powerful enemy hero, or some other terrifying singular threat! Defeat the Champion and your side is assured of victory!

2. Defend the Breach
A hole has opened up in the ranks and/or fortifications, and enemy troops are surging through! Hold the line for several rounds until reinforcements arrive, your troops recover, or the fortification can be shored up.

3. Enemy Leader
A particularly important enemy commander is here, and their tactical acumen will lead to the inevitable victory of the enemy forces if they're not stopped!
Fight, sneak or otherwise reach the leader in a few rounds and either kill them or force them to flee.

4. Morale Shaken
The pressure of combat, the death of a beloved soldier, or some other calamity has shaken the faith of the troops! Fight at their side and encourage them with inspirational deeds and words, stirring their souls and raising their morale to fight back against their foes!

5. Unexpected Tactics
Something completely unanticipated has happened! Outriders are attacking the flanks, or some fell magicks have turned the soil to mud, or a feigned retreat has left the unit surrounded by once-hidden foes! Help your Unit recover the initiative and turn the tides back in your favour!

6. Push the Advantage
A hole has opened up in the enemy formation, an opportunity to break through if only someone could seize it! Lead the charge and break the morale of your foes!

7. Capture the Standard
The enemy is holding some prideful totem that gives their forces strength and power! Capture their prized standard, powerful magical totem, or whatever it is that will make them abased and demoralised if it is seized!

8. Mark a Target
Some sort of destructive ranged attack, be it massed bowmen or artillery or arch-wizard, is ready to fire on a tactically important place but they need someone to mark the target before they can do so!
Somehow get to the target location and plant the smoke canister, arrow-attractor, or magical ley-stone in position so they can blow it to hell!

9. Recon Mission
If only your troops knew what was ahead they could assure themselves victory! Whether it's an ambush, a trap, or simply knowing what the enemy they're facing has to fight back with, there's something ahead that would be easily overcome with prior knowledge.
You have limited time to go forth, find out the necessary knowledge, and survive to return and inform your troops of what lies ahead!

10. Elite Guard
The elite forces of the enemy are ahead - bloody-minded veterans, empowered uruk-hai, or some other force much more powerful than their regular rank-and-file is arrayed before you.
Support your troops in the fight ahead against a multitude of powerful foes!


The exact make-up of these different Flashpoints is down to the individual scenario.
If the enemy is other humans, an Enemy Champion result might be a particularly powerful warrior with a massive sword.
If they're undead it might be a massive zombie abomination that crushes all before it.
If they're mushroom men perhaps it's a rolling spore monster that chokes your soldiers so that the shroom rank-and-file can finish them off. 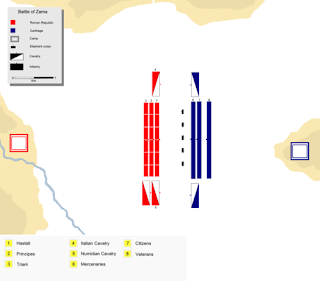 1. Movement
Units move in whatever order you want up to their speed.

2. Create Flashpoints
If two opposing units are in adjacent hexes, a Flashpoint occurs!

3. PC Movement
PCs move in whatever order they want.
Since they don't have to march in formation, PCs are faster than regular Units.
Mounted: 4 hexes.
Lightly Encumbered: 3 hexes
Encumbered: 2 hexes
Morbidly Encumbered: 1 hex

4. Flashpoints!
If one or more PCs has moved to a Flashpoint, they see what the scenario is!
If they choose to engage, they join the Flashpoint scenario.

Archers
Power 6. Speed 2.
- Ranged: This unit can attack from 2 hexes away, but has -2 Power in normal melee combat. If they lose in a ranged combat against a non-ranged foe, they take no damage.

Dryads
Power 8. Speed 2.
- Treestride: This unit is not slowed by forests.

Dragon
Power 10. Speed 3.
- Flying: This unit is not blocked by impassable terrain.
- Devastate: If this unit wins a combat, the enemy unit loses 4 Power instead of 2.

Hopefully that's good enough! If you want to add monstrous unkillable titans that are threatened by nothing other than each other, check out the original post!
Posted by James Young at 07:33