The Lair of the Holly Spirit

The local group of evil cultists have been hard at work for the past year preparing for the culmination of their plan to SUMMON SATAN!
Unfortunately their leader was dyslexic and fucked up the final ritual.
Now their mountain lair is full of CHRISTMAS FEAR! Prepare to meet your doom in… THE LAIR OF THE HOLLY SPIRIT!

This was the dungeon I ran for Christmas last year and it was quite well received!
The session began with a bunch of generic black-robed cultists fleeing down the mountain past the PCs.
If stopped, one of the cultists will inform them that their Satan summoning ritual went wrong because it turns out the cult leader's dyslexic!
The best part was that the players somehow didn't work out the dumb Satan-Santa dyslexia joke until right at the end, up until then they'd been hunting the "Ice Satan" and his christmas themed minions. 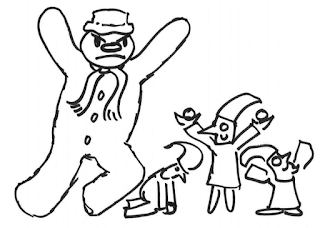 Evil Snowmen
HD 2, AC leather, 2 attacks dealing 1d6  + freeze, morale 10
On hit, save vs Paralyze or be frozen in a block of ice until you break free with a successful wrestle (Ice gets +0 to wrestle), every round you’re trapped you take another 1d6 damage.
Snowmen are immune to fire.

The Toy Soldier
HD 4, AC plate, one gun attack dealing 1d8 + gun benefits OR bayonet dealing 1d8, morale 12
Gun attack pierces 5 points of armour and deals exploding damage (ie. If they roll 8 for damage, roll
again and add to total. Keep going until they don’t roll an 8). Gun takes a round to reload.

The Snugglebear
HD 4, AC leather, one snuggly attack dealing 1d6 damage + snuggle, morale 12.
Takes only 1 damage from smashy weapons. On hit, forces you to snuggle it – jump on and just give it big hugs. Save vs paralyze on subsequent turns to stop snuggling, but you can’t attack the bear on the turn you stop snuggling because it’s so warm and lovely and you love it. 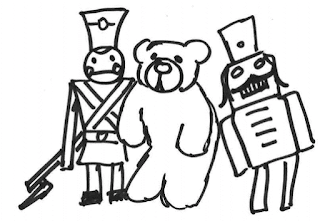 Santa
HD 6, AC leather, multiple attack options, morale 12.
Santa can attack twice a round with his choice of the following attacks:
- SACK WHACK – 2d8 damage from overhead sack smack
- HO HO HO – blasts all nearby away from him! Those blasted into walls take 1d6 damage.
- HELLVES – Summon 1d4 Christmas Gremlins to his side!
Additionally, Santa is surrounded by CHRISTMAS MAGIC BULLSHIT
Every time a character attacks Santa (no matter whether they hit or miss) roll 1d6 –
1. Mistletoe Mayhem! Random character has mistletoe appear above their head, Save vs Magic or smooch random person nearby. Obviously both miss their next go due to smooching.
2. Christmas Cheer! Random character is doused with magic eggnog and is fucking trashed. Save vs Booze (aka vs Poison) or -4 to all actions and AC for the next ten minutes.
3. Ice to Meet You! Terrain in a 20’ radius around Santa is suddenly slippery as fuck. Characters who want to move through it must save vs Paralyze or fall on their arse. Santa is immune of course.
4. Elf on the Shelf! Random character has a Christmas Gremlin appear on their head and start attacking their mates with snowballs while giggling joyfully.
5. Family Argument! Random character attacks their closest ally, who also attacks them back. Save vs Magic to avoid this if either player brings up a legitimate grievance they or their character has against the other.
6. In a Single Night! Santa teleports behind a random character and attacks them with his SACK WHACK.
The person who strikes the KILLING BLOW against Santa, as in classic Tim Allen documentary The Santa Clause, becomes the new Santa!
They gain the following abilities during the winter months:
- Immunity to cold weather, half damage from cold attacks
- Heart beats in time to “Jingle Bells”
- Unerring aim with snowballs, dealing 1 damage
- Children will always tell you the truth
- Detect Naughty or Nice at will
- Ability to ascend/descend small vertical shafts instantly
- If killed, killer slowly becomes Santa Claus

But also the following penalties during the winter months:
- Must return to grotto in the Frozen North for the entirety of December
- Massive weight gain no matter what you do
- Hair turns white
- Cannot lie, cheat or steal.
- Craving for sugar, brandy and milk 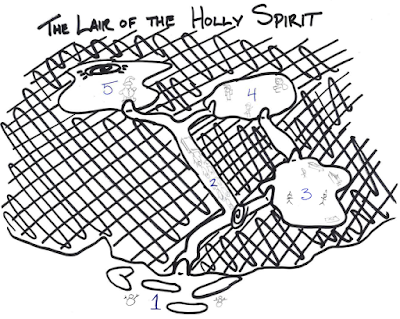 THE DUNGEON
1. Out the front of the grotto are 2d10 Christmas Gremlins! They’re in two teams having a snowball fight and it’s obviously a great time. They keep throwing really impressive trick shots to hit each other behind the snow barricades. They’re pretty friendly.
2 Evil Snowmen are also here, but they look like normal snowmen unless they and/or the Christmas Gremlins are attacked.

2. 13 Reindeer are harnessed to a sleigh, facing a misty portal. Their leader has a red nose. The portal leads to a similar misty portal halfway up the mountain. This is the launch pad for the Santa’s reindeer team.
If one of the players flicks the reins and can recite the reindeer’s names in order for real without looking it up, the reindeer fly out of the misty portal and into the sky! Anyone in the sleigh itself can easily steer. The reindeer run out of magic in January.

3. The Workshop was once the kitchen and pantry for the Satanists. Now it contains 2d6 Christmas Gremlins who hate their jobs making shitty anachronistic branded toys from wood and plastic. The toys are worth 3000sp if sold to somebody who realises how incredible Thomas the Tank Engine and Meccano are to pre-modern society.

4. The Playroom was once the bedroom for the cultists. Now the Toy Soldier, the Nutcracker and the Snugglebear are in this room, but they look like set dressing. They will come to life if the Christmas Gremlins and/or Santa are attacked… or if someone searches the room.
The cultists stored various valuables in this room. Notable are a small silver goat statue worth 500 sp, a case of miscellaneous magical herbs which give a one-time +5 bonus to a casting of Summon, and a pack of Satanist pamphlets that mention the cult’s address in a nearby town.

5. The Grotto was where the summoning of Satan was supposed to take place. Too bad the dyslexic cult leader summoned Santa instead.
Above the door to the south, Mistletoe is on the ceiling. Anyone who enters the room must Save vs Magic or smooch their nearest ally.
Santa is in this room. He’s jolly, but does not take kindly to people interrupting his Christmas preparations! Santa will fuck you up if you come into this room. Also, if he’s attacked, a massive siren will sound and everyone else in the complex will come to defend Santa.
To the north, a Portal to the Christmas Dimension swirls inside a pentagram. Floating in a frozen shard of ice above it is the cult leader whose name is Tranquilix Vern (real name Herbert Schuster) who just wants to go home. 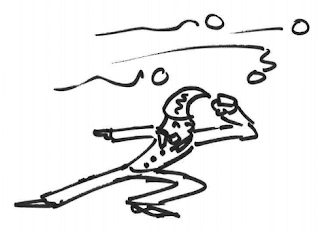 Inside Santa’s sack, if you defeat him, are the following things:
- A Terry’s Chocolate Orange. 20 charges. Each “charge” heals 1d6 HP, but temporarily costs a single point of Constitution. Lost points of Constitution come back after a good sleep.
- The Ice Shard Sword. A critical hit means the target is frozen in ice like they were hit by an Evil Snowman! Only works in the winter months (in-game and real life) otherwise the blade melts.
- Candy Cane Daggers. A paired set that taste deliciously minty. Killing someone with one dagger creates a Christmas Gremlin. Killing someone with both (ie. When you roll the same damage on both rolls when dual-wielding) creates a Christmas Gremlin under your control.
- Horrible Christmas Jumper so impossibly horrible that people blank it out of their minds. +3 to Stealth. On successful Stealth roll though, lights up with a loud fun jingle!
- 10 Mince Pies that count as rations for adults, but force a morale check in children.
- Santa’s Expanding Sack will expand to encompass anything you put in it.
Posted by James Young at 01:57