The Mould Junkies of Rutland

Mould just feels good. It amps you up, makes you feel happy and connected to everyone around you. Gives you a sense of what everyone else on it is feeling, brings you up to their level.

It's just a great fucking time for as long as it lasts and it lasts a good few hours at least.

The comedown is savage though. Not just the nausea and the sweating, but the inability to feel empathy for others. If you can't keep the high going you'll come out of it feeling pretty dismal until you can get another hit. Other addicts are going to know what you're going through because they're feeling it too, but you'll seem super weird to any non-addicts because you're constantly misjudging intentions and overcompensating for your inability to read emotions.
This is an issue because the only way you can get high is by being present when the infestation speads to another person, and it's hard to persuade someone to try it out when you're a twitchy scuzzbag with a spreading skin infection.

That's an issue, actually. It'll start growing out over your skin if you don't get a regular fix. That's not such a bad thing though, the comedown's less brutal and the pheromones floating out of your body let your fellow addicts feel what you feel. They want to hang out with you because it's the only way to actually know how someone else feels when you're off the mould, and they want to make you happy because that physically makes them happy too.
It makes you feel connected.

If you go longer without taking a hit the mold gets thicker, bulks up more, fleshy fruiting bodies spreading out in spiraling curlicues across your skin and encrusted clothes. It fills your throat with soft rich loam, softens your movements and motions. You haven't had to eat for a long time and now all you really want to do is find somewhere dark and safe and soft and comfortable, coccooned in a cushion of mould.
It feels nice, really nice, and even nicer amongst others of your own kind. You just want to crawl into a little lump with them, be warm and safe and cozy together. You'd tell your other friends how happy you are but you can't speak through the fungal mass filling your mouth.
They can feel it, anyway, and you can feel them. You can feel the moods and emotions of all the addicts around you.

It's very nice and safe and soft, until a gang of three to eight malevolent psychopaths come in and kill everyone's buzz.
You can feel the anger and pain of all your friends as it spreads through the whole network, as they come into your soft warm place and discuss their dead and share their grief. Their sadness is yours and your sadness is theirs. The interlopers must be stopped, so you can go back to the soft warm happiness you're scared you've lost forever. 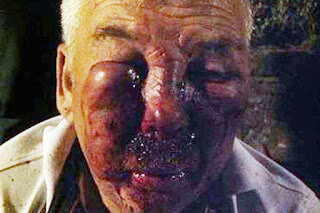 Mould junkies seem harmless at first, just the DM doing an impression of a sketchy dealer or Otto off the Simpsons. But they'll do anything to get a fix.
They have unbreakable morale until they manage to infest someone, then just collapse and tell the others to sit back and enjoy it, maybe get some music going. If threatened they'll run off and escape together, nobody wants negativity while they're tripping.

After a while, if an addict can't get a daily high, they'll start to become a Mould Vessel. These guys have 2 hit dice and are surrounded by a cloud of empathogenic pheromones that transmit their emotions to other addicts. This is usually fine, but if they get angry or sad they transmit that to others and suddenly your mob of feel-good junkies are getting vicious.
If threatened a Mould Vessel can excrete a thick cloud of spores rich with pheromones, acting like a smokescreen that also creates a powerful emotional punch in their buddies.

The final stage is the Filled Man, very rarely seen outside in the day since they prefer moist, damp spaces in the company of others of their kind. They clump up into big mounds of mould unless there's something to rouse them.
They're completely silent in their footsteps and their breathing. They have five hit dice and the mass of mould upon them gives them armour as chain. Even in death they continue the cycle, if slain they explode into a cloud of infestation-spreading spores that float on the breeze.
Left undisturbed they will form cysts with others and eventually die in their comfortable embrace, ready to be discovered in years to come and begin another cycle of addiction.
Posted by James Young at 16:20