Greg Acker asked and, despite having been distracted by the Santicore summary project, I SHALL ANSWER! 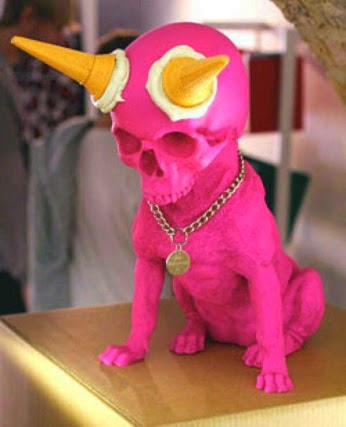 The Pygmy Marmaduke eats language.
Upon first encountering the Pygmy Marmaduke, show this picture to the first player to walk into the room. They have up to one minute to describe it without using words.
For the duration of the player's interactions with the Pygmy Marmaduke, they cannot use words to talk or to describe their actions
Words cover both writing and speech, and thus the players may make use of mime, drawings, symbols, and other such contrivances in order to make their intentions known. Take too long and your go gets skipped. This effect persists for as long as the players are in the creature's vicinity.

The Pygmy Marmaduke attacks by springing onto one's face and placing its skull against the forehead, draining a language that person knows into itself. It will automatically hit on subsequent rounds unless the victim succeeds in a Wrestling roll to throw it off.
Each language eaten invigorates the creature:
1d4 HP if the language is local to the area (classically "Common").
1d6 HP if the language is not local to the area (foreign dialects, local Demihuman languages).
1d8 HP if the language is considered to be exotic (English versus Japanese, seldom-spoken or rare Demihuman languages).
1d10 HP and a permanent additional hit die if it is an ancient, dead or dying language. (Latin, Duvan'Ku)
This can heal it over and above its maximum HP, but any excess is lost after 24 hours.

In LotFP, when the creature has drained all languages players know it starts draining points from the Language skill. This heals it for 1d6 HP per pip.
If not using LotFP's retroactive language thing, skip straight to the tongue gobbling and catatonia.

When the last Language point is drained the victim goes catatonic. They are unable to subvocalise, unable to frame thoughts, and incapable of thinking in anything but raw concepts. With months of specialised psychiatric care they may recover.
As the victim falls drooling to their knees the Pygmy Marmaduke steals the person's tongue and leaps away. The stolen tongue dangles beneath its skull-jaw and enables the Pygmy Marmaduke to speak in the victim's voice.
It often uses this ability to pretend that the victim's consciousness has been swapped with it. Allow the player of the catatonic character to play as the Pygmy Marmaduke (the deception is perfect) until it has an opportunity to strike again. It should go without saying that a party that sleeps in its vicinity will be rolling up fresh characters by morning. 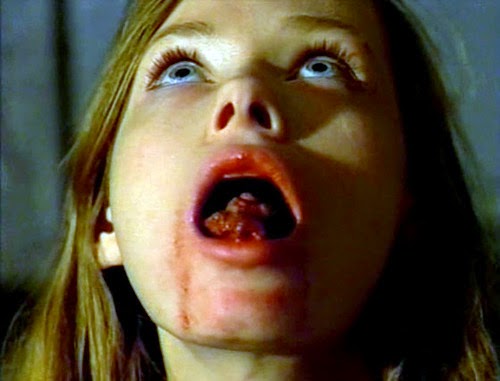 The Pygmy Marmaduke seeks to eat all language. It has a particular fondness for the culinary delights of foreign, rare and old languages. The anachronism-laden speech of player characters is a strange but somehow moreish treat.
It is highly intelligent and able to speak in the voice of any person whose tongue it is wearing. It uses this ability solely to concoct plots in which it can eat the tongues of scholars and speakers of obscure languages.
Its fondest wish is to savour the tongue of the last speaker of an ancient and beautiful language. It will go to any lengths to achieve this goal.

If slain, the Pygmy Marmaduke's brass necklace can be removed after cutting off the creature's head.

Necklace of the Marmaduke


This necklace allows the wearer to replace their tongue with the tongue of another.
The wearer knows any (and only) languages the donor of the tongue knows or knew. They speak with the donor's voice.
Casters take 1d4 days to get used to the new tongue before they can cast spells, unless it's something ridiculous like a lark tongue in which case spellcasting is impossible.
While actually bonding a tongue is painless, ripping out your tongue deals 1d6 damage.

a character
is considered conversant in a language after
6 months of full immersion, fluent after two
years. A language can be taught by a tutor, but
that takes two years of at least five lessons a
week (at 3sp a lesson!) to become comfortably
conversant, and fluency does not come until
being immersed in the language.