The Gate and its Surrounds

This is the land surrounding the Gate. The Gate is the only (easy) way through the Wall. They are named generically because I like short names and also because I am always scared of doing a Forgotten Realms and naming everything like a five year old moving fantasy themed word magnets around on the fridge. 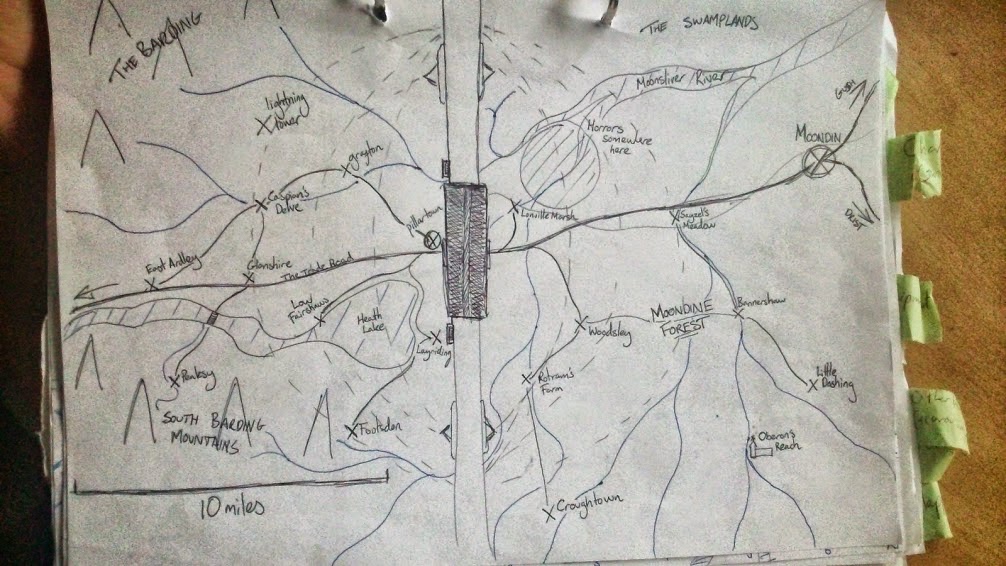 So you might notice that the area is quite small in the scheme of things. It's about the size of BTAM's map which I rate highly, an adventuring party could walk across it in a day.
Scale is something I've struggled with since reading stuff like this and going for drives and walks to get a sense of distance and going up a mountain in Scotland and seeing hundreds of miles to the horizon.

This map is, in fact, a small section straddling the edge of my main map, shown here. The hex numbering is messed up because it seemed like a good idea at the time when I first made this so many years ago. How young I was then.
The Wall is the long line on the left side, and the Gate itself is the little oblong in hex P0 in the map below with the only road going through it. It is a very big gate. 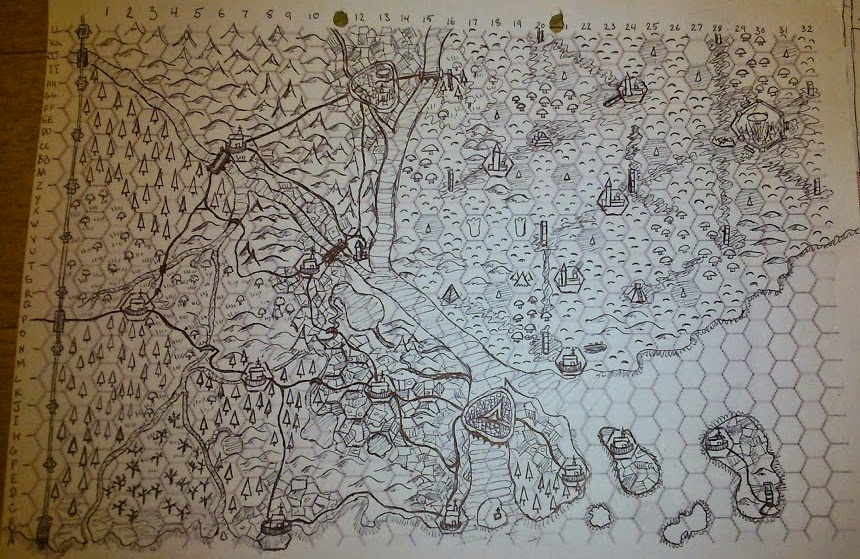 Now, I drew this map ages ago, before I'd gotten into LotFP and seen how useful it is to be able to use Google Earth as your campaign map. To get a sense of the scale (and work out how it fucked up the coastline), I did this in google maps to work out how it was placed in the south of England.
A remarkably good fit, considering. I've lost much of the southeast and closed off the Bristol Channel, but hey it'll do. There was probably a magical war or something.

Anyway, that's how big the Gate area it is. Quite small. The trick is to pack it with so much adventure that the players don't need to leave unless they really want to! It's basically split into two halves across the wall, on one side is the lands around the Gate and on the other side is the Forest of Moondine.
On the west is more safe and civilisationy and in the east it's more wild and dangerous and wandering monstery.

The Wall and the Gate
An ancient, giant, perfectly straight wall cleaves through the land. It was built by unknown builders some time between the Dwarfs cutting themselves off from the world and humanity being freed from the chains of their Halfling oppressors. Its purpose and origins are the subject of several conflicting legends, but none suggest the truth. This wall wasn't built to keep something out, it was built to keep something in.
This is the Barding Wall or, as all large walls are known in fiction, simply as The Wall. Imaginatively the only way through is called the Gate.
It generates an anti-magic field all the way along its length. Or at least, it did. Within the last few months something has happened. The Wall has been breached at a point several day's ride north of the Gate, deactivating the anti-magic shell and allowing magic back into this part of the world. Only the area a few miles around the Gate (represented by dotted lines on the map) still maintains an anti-magic zone running on the ancient equivalent of a backup generator.

The Barding:
The mountainous area west of the Wall is known as the Barding. It is named after the Wall, rather than the other way round. The rugged Mountain Men live in the mountains to the south, resisting all attempts to civilise them.

The Wall Villages:
A bunch of civilised villages in the area west of the Gate. Excel documentation is here. The populace are fairly generic fantasy folks who farm the land and worship the Nine like all good god-fearing Nonanists should.

The Lightning Tower:
This is the Tower of the Stargazer and has lain dormant for centuries while the wall's full anti-magic field was up. Now it's attracting lightning again and making people skittish.

Caspian's Delve:
The central megadungeon to this area and, confusingly, also the name of the nearby village. Story goes that miners made a hell of a living out of the rich gem deposits found within the mines here.
Since the wall's anti-magic field fell, gems have started growing back within the cave, strange noises have been heard within, and strange shapes can be seen dancing on the mountaintops in the dark of the new moon.
Their somewhat egotistical religious leader has recently gone into the Delve to find the source of these unnatural magical happenings. He has not returned.
Caspian's Delve is a fairly standard dungeon bash with Spiderclimb Elves, goblins, a mad cleric and his cult of stone, and a many-legged horror with veins of amber. 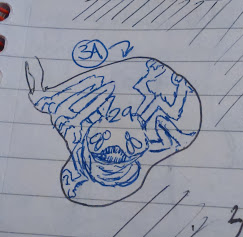 The Demon Armies:
To the west, ever encroaching, are the demonic armies of Galfashnak of the Charnel Earth. A grotesquely large and fat devil of Sloth, he is glutted on the sin that precedes his apocalyptic army of darkness. His armies are currently sacking Karlstadt and its surrounds.
There is one catch - the devils in his army, rather than the semantically distinct demons, feed upon sin. If a population is completely virtuous the army cannot touch them, for its soldiers will quickly grow hungry and die from lack of sustenance. To this end, a vanguard of sin-causing minor devils is harassing the outlying villages and trying to discover a means with which to evade or destroy the demon-banishing anti-magic field surrounding the Gate.


The Mountain Men:
Ever hairy, the Mountain Men live in the mountainous regions to the southwest. Usually content to live their pagan ways on the alpine slopes, the recent chaos has caused them to roam further afield in search of rape and pillage and revenge on the soft-bellied farmers in the foothills.
Their predations may be stopped for a time by invading their main living area, the Caves of the Mountain Men. It is a fairly standard dungeon bash involving hairy mountain men with greataxes, a wife from Footsden who eloped with their rugged leader, and various mostly-natural threats that live in caves.

The Mold Creatures:
From within the forest across the Wall, the dreaded mold creatures attack Pillartown. They seek only to spread their mold infection to more hosts. While the Gate is easily defensible for now, the creatures become more powerful and numerous by the day.
Whilst Shub-Niggurath is the progenitor of the mold, it follows its own unknowable machinations and has no agenda of its own for the Gate area. Moldus Vane, the Mad Cleric of Moondin, seeks to use the mold to defend his followers from the demon army to the west and the horde of undead to the east. An army of mindless Filled Men generates no sin for the demons to feast upon and serves as a strong defence against the countless Dead. After all, Filled Men burst into a cloud of spores when killed which makes them useless to Necromancers.
Moldus Vane justifies this maltreatment of his flock in many ways and truly believes he is a good man doing the right thing. Their souls are already destined for Heaven, what matter the harm that befalls their mortal form?

The Human Populace:
The local population is gripped by both willful ignorance and mounting fear. The Wall's anti-magic field has covered the area for so long that most of the people don't believe in magic or demons or any of the rest. They mostly assume that the term "demon army" is a figurative device used by war-ravaged refugees. They are slow to react, and the rising number of supernatural events is severely testing their faith.
As word of the mold beasts and Caspian's Delve spreads, and the army of demons begins to take over the villages outside of the anti-magic field, chaos will spread as they become very divided in what to do. Many will flee to the mountains or to Pillartown. Others, like the population of Layriding, will begin hoarding resources others sorely need. 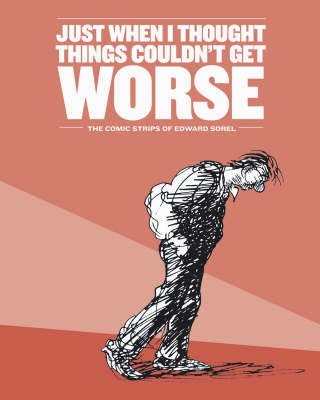 Running this shit:
In my game, the players came down the river from Better Than Any Man and ended up in East Ardley where the events of A Single Small Cut occurred, then spread out from there.

Random encounters west of the Wall, unlike the forests to the east, are mostly mundane and human-scale with a bunch of results cribbed from BTAM. These should be gradually replaced with demons and/or mold beasts as the situation develops.

A sandbox game is, of course, built upon a rumour table. That's what mine looked like around four sessions in, unfortunately I never saved the original. Replace results between sessions as per usual.
It has rumours related to things east of the wall ooOOoOoooo how mysterious. You'll have to wait until I pull my finger out and do the rest at some other time.
Posted by James Young at 04:29