I've been in the Scottish Highlands for the past week and holy shit have I been way understocking my six mile hexes.
More later, for now the Elf.

For later reference, the current list of heartspell abilities and effects is here.


The fey: Every elf was once a human. Each experienced the touch of the Fey Folk as a child, though this experience differs from person to person and elf to elf.
They never sleep, but every night they cavort and yammer in the moonlight to regain their spells for an hour per level. An elf somehow prevented from doing this does not regain their spells and associated characteristics and benefits.
Moondancers: An elf gains an extra spell slot of any level they are able to cast in the week preceding the new moon and loses a spell slot during the week preceding the full moon.
At the time of the new moon they gain an extra spell slot of every level they are able to cast and vice versa at the time of the full moon.

Heartspell: Each elf is defined by one ofthe first level spells, known as their heartspell. An elf can cast their heartspell in place of any other spell at will. A person who eats an elf's heart gains the ability to cast that spell the dead Elf's level times per day, in addition to any class powers they had already, so long as they spend the night in moonlight. At the New Moon and every night thereafter, the Wild Hunt hunts a heart-eater until they are dead.

Natural magicians: Elves, like wizards, cannot double up on spells and may flip reversible spells upon casting. They do not need to maintain a spellbook but learning a new spell takes the same time and cost in ritual components as normal.

Interrupted Casting: If the elf is interrupted while casting a spell they release a Chaos Burst but may pass an INT check to maintain casting.

Cold iron: Cold iron is elf bane. Cold iron is simply iron which is cool to the touch. It gives the elf -2 to hit and damage on any round they were touched by it and makes them unable to cast spells for as many rounds as they have spells prepared.

You might have seen this all before, but it's been a while and the stats say the blog is more popular and I am bad at keeping things up to date once I've posted them and some tweaks have been made since then anyway since I am eternally improving and fiddling with my rules session to session.

Elves are not a society or even truly a race apart from Man, they are the Fey and they are completely fucked up and horrible and scary, both for humanity and themselves. They are the elves of the Wild Hunt and the Faerie Courts, unseemly and Unseelie.
I did this thing here and it has rarely come up but I am pleased with it regardless and presume it will be useful at some point. I wanted to turn Elves from an aggregate Magic-User/Fighter class into something More.
This rule just means that they go off and do elfy things of a night, and that if you have an elf in your party the townsfolk of the local burg might witness strange happenings and signs and become fearful. It also means elves need to be near the surface to regain their powers, and preferably out of sight of town in case someone sees them and suspects. This mechanically nudges the Elf's player to stay in the open wilderness, much like someone playing the Dwarf is nudged underground.
What if you have both in your party? Well hopefully they're always slightly pissy at each other which creates that classic elf/dwarf animosity!

Moondancers was added on a whim, I like the idea that elves are sort of anti-werewolves who disappear in the dark of the new moon to do strange and baneful deeds and I particularly like that an Elf player will have to be aware of the moon's passage. Other players probably wouldn't give a shit but for the Elf the moon's phases are tied into the magic they can cast and their physical features and are thus important.
"Woah dude how or why would you bother tracking moon phases?"
Luckily I'm using the calendar stolen from here and added moon phases so that the last day of the month coincided with the full moon (thirty days per moon cycle because why not) and also changed Fahrenheit to Celsius because the rest of the world has moved on, America, stop being a pouty dick about the metric system.

The deal with the Heartspell is that it ties elves to their spells and makes them have some more differences to magic users. Some of their elf abilities might serve to make their heartspell more effective, others give them sort of passive buffs.
Note in particular that elves don't get cantrips, their powers are powerful yet limited and inflexible.
The thing with eating Elf hearts is to make Elf players wary and to give players who learn about the heart eating a tradeoff between short term power and long term getting-hunted-forever-by-the-faerie-court.
I haven't populated all the heartspell stuff yet. As my players choose the elf class and grow in levels I'll be updating this doc with their creepy powers.

Natural magicians just means that elves don't go around with a spellbook. Books imply learning and rote skill which is not the deal with these elves.
That said, an elf can act as a spellbook for Magic-User spell research purposes if it is willing to teach the wizard, with the implication that this is how humans came to have magic in the first place. 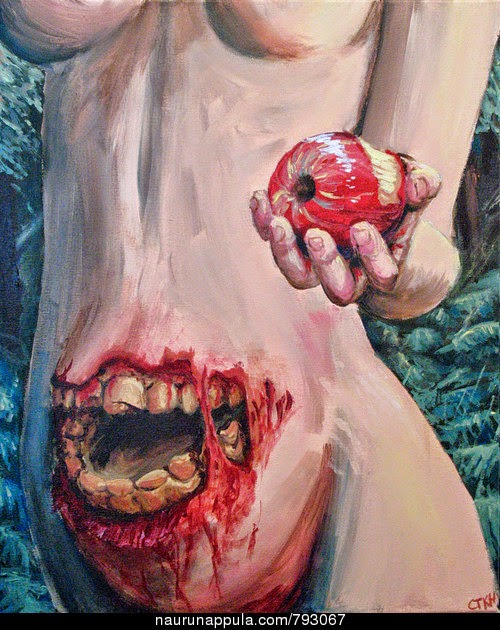 Interrupted casting for Elves is a subtle but notable change to the regular Magic-User. An interrupted magic user always loses the spell but also has to pass an Int check to contain the Chaos Burst. An Elf never contains the Chaos Burst but can pass an Int check to keep on casting, meaning multiple people wailing on a casting Elf might fuck up the general area way more mightily than a Magic User, and still the Elf might still get to cast the spell anyway.

Changeling makes Elves more inhuman and comes with a lot of scared townsfolky baggage. The central tradeoff is between keeping the spells for side-effect ability purposes, and casting them for actual spell effects.
Plus an elf willingly decreasing their power to walk among the humans seems true to theme.

Classically Elves are way allergic to cold iron. This is for that. If you want to capture an elf without risk of reprisal you slap some iron manacles on, and if you want to hunt elves you get a sword of iron rather than steel.
Posted by James Young at 00:12