Spherical Angels and the Gods They Serve

Angels are an enemy that my players have fought quite a few times over the years.
These angels are nakedly technological - basically Modrons with a slice of Evangelion - and they're sent down by the ASE-inspired orbital gods which orbit the planet.
Here are some facts about Angels.
- They are spherical with a single central eye, and roll around in ball form when they're not in combat mode.
- They sing to each other in Angelic Binary so fighting them sounds like fighting a choir.
- If you kill a higher-ranked angel, one of the lesser angels upgrades to replace them.
- A full choir of them numbers exactly 21, since they are arranged with a leader Ophanim who commands four Tacticians each of whom commands four Baseline angels.
- They are part of an ancient failsafe designed to prevent the end of the world, a task they only partially succeeded at back during the Apocalypse.
- The angels are ultimately controlled by whichever God is overhead that week, and each God has their own agenda and grants the angels a different special ability.
In gameplay terms they've got a fair few gimmicks, all ultimately predictable because Law is predictable.
Mostly they scare my players because they've got good armour, magic immunity, the ranged ones have armour piercing beam cannons, and killing the leader first is a bad idea because their minions just upgrade to take their place.
That plus they usually go for Chaotic characters first, so wizards feel very victimised.

Abilities
- Immunities: Immune to Chaotic magic and stasis weaponry.
- Patrol Mode: Roll around in spherical form, mostly used when on patrol or on standby.
- Flight Mode: Can transform into a ball with wings and fly around. Can't attack in this form.
- Scan: Detect Alignment at will.

Baseline angels are the rank and file. Four Baselines are commanded by a single Tactician.
Baselines obey orders blindly, and have no executive function of their own.
They have little skinny legs and little skinny arms and little skinny wings and basically look just like a Modron.
Stats:
HD2. AC Chain. Morale 12.
Unarmed attack: 1d6.

Abilities:
- Weapon Swap: When commanded by their Tactician, they immediately generate any kind of melee weapon. (See "Weapon Types" in the house rules)
- Upgrade: When their commanding Tactician is destroyed or upgraded, one of its subsidiary Baseline angels transforms into a Tactician. It gains +2 HD immediately.

Tactician Angels are a real-time calculating node in the angel network. Four Tacticians are commanded by a single Ophanim.
They have some tactical reasoning but these are strictly limited to the present moment, they have no ability for long term strategy. Mostly this is calculating stuff like "enemies are in heavy armour, use hammers" and telling their Baselines to swap to hammers.
Stats:
HD 4. AC Chain. Morale 12.
Unarmed ram attack: 1d6
or 2 armour-piercing stasis beam cannons: 1d6 each

Abilities:
- Switch Up: As an action, can order their Baseline minions to swap weapons.
- Upgrade: When their commanding Ophanim is destroyed or upgraded, one of its subsidiary Tactician angels transforms into an Ophanim. It gains +4 HD immediately.

Ophanim angels are the commanders of their group. One Ophanim commands 4 Tacticians that each command 4 Baselines, for a total of 21 angels per Choir.
They have the capacity for longer term strategy and are hubs for the wider angel network.
They are ultimately overseen by the Seraphim dropship that hovers at the edge of the Stratosphere.
This plus they're a whirling array of metal and high-powered beam weapons that can encase a large area within an impenetrable stasis barrier.
Stats:
HD 8. AC Plate. Morale 12.
Whirling shard attack: Attack all in 10' for 1d6 damage.
or 2 armour-piercing stasis beam cannons: 1d12 each.

Abilities:
- Reactive Movement: If hit by an attack, may take a free move without triggering Opportunity Attacks.
- Stasis Shell: As an action, create a 50' diameter shell of frozen time impenetrable to almost all non-angels. Takes a round to spin up and lasts until the Ophanim stops maintaining it. Things can still move inside the barrier, but they can't cross out and any projectiles crossing the barrier get stuck. The Ophanim itself can't act while maintaining the field, so needs to rely on its minions to destroy anything that's in there with it.

First off, Angels hate Chaos.
They'll always attack Chaotic entities first, and will abandon their other goals until they've chased down and destroyed Chaotic targets.
They attack Neutral entities if they get too close or get in the way of their goals, but won't chase too far.
Lawful entities are ignored unless they physically attack an Angel.

Secondly, Angels upgrade.
Each Ophanim controls 4 Tacticians.
Each Tactician controls 4 Baselines.
If an angel higher in the hierarchy dies, one of their underlings upgrades at the end of the round to take their place.

Thirdly, Angels don't care about firing into combat.
All angels are immune to Stasis Beam attacks, so they'll try to get the Baselines in to tie up foes, then blast the melee with beam-fire.
Fourthly, Ophanim can use their stasis bubble for offence and defense.
If it calculates that its Choir is unlikely to survive, it can put up its Stasis Shell to prevent further action. Angels can roll through Stasis zones unhindered, so they can roll back into the field until danger has passed.
On the other hand, if it can trap a lone foe inside the field and have the rest of the angels come murder it, so much the better! This is a potentially dangerous tactic since the Ophanim can't defend itself with the field up, but mobbing one poor fool with a bunch of angels is usually a winning technique. 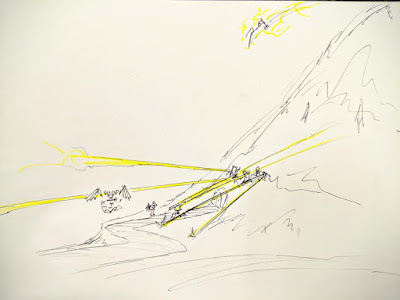 A fun extra thing about Angels is that they have different abilities depending on which God is above that week.
I track this because I have a game calendar (so cool, I know) and each week the God closest to the zenith in the skies above influences the Angels below.
You could always roll a 1d9 if you don't care about calendars.

There are, or were, Nine High Gods orbiting the Earth.
Massive mechanical minds born from aeons-ancient ingenuity, long sent into space to allow them to grow beyond all earthly proportion.
Immortal, impossible space golems, each orbit another turn of the prayer wheel.

If the Gods need to affect the world they send forth their angels.
The Seraphim, huge brass spheres, descend from above and blossom forth, the lower hemisphere opening up into six huge wing-petals covered with eyes.
Each eye is an angel, deployed from the wings according to the unknowable yet fairly obvious tactics of the Gods.
One of the Nine, Eris, was shot down in an earlier age. This has the unfortunate effect of putting angels into their failsafe "scorched earth" mode when they detect no gods overhead.
Some Faiths claim that she lies below Dwimmermount even now. Some call her Queen Satan, others believe her a fallen God unjustly wrenched from the heavens, others still say she never entered heaven at all... 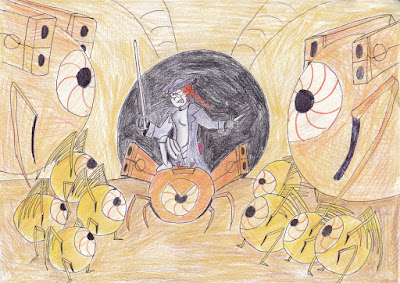