Perttu pushed me to this. You're the best, Perttu! You have forced me to become my best self.

Behold, an actual table pamphlet where I actually pulled everything together!


It's designed as a booklet for table use, as in someone gets to 0HP and you slap it down in front of them like it's a Dealing With Grief pamphlet or something.

Letting the player look up their own death table results and working out what gory thing just happened is a lot more fun than me reading it out off a table. Plus it means they get the mechanics better than me flipping coloured beads at them and saying "YOU BLEED NOW".

Rose & Kingfisher has an additional Psychic death table here if you need that too! (I sure as hell will!)


This is based directly on Courtney's Table For Avoiding Death, and all the writing is directly plagiarised.
If you like it, go back and report about it! That part remains.

The only things I've added are the Bleeding table, and trimming off the fatty status effects in favour of clean Bleed/Pain/Trauma tokens.

The other day we had a super great player-on-player battle due to a series of unfortunate events, which ended up in the gory death of both PCs. It went great, especially since the Barbarian was raging and so couldn't physically die despite getting a rapier to the brain. It was super awesome. 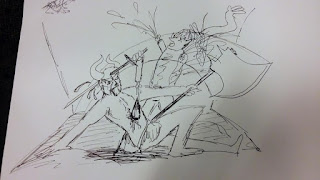