So while I'm pretty stoked about this new religion bollocks, it's a tough sell to hand a player an actual religious pamphlet for an actually definitely fake religion and ask them to make an informed choice about what fake religious denomination they want to be.

I'll leave the actual deciding part to players of Clerics. Here's a guide for the masses. 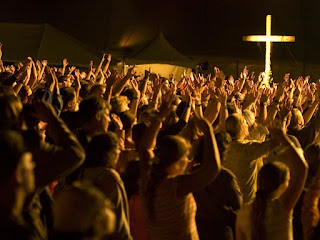 Choosing My Religion
So you’re choosing your character’s faith.What a decision! You have three options -A. Roll RandomlyB. Go with whatever the Cleric in the party tells you to doC. Make an informed decision
Choice A. Roll Randomly
Roll 1d20:1-9: Loegrianism. There are Nine High Gods and no others.10-14: Roman Nonanism. There are Nine High Gods and there are Low Gods who serve them.15-17: Denialism. There is One True God.18: Unorthodoxy. The Nine High Gods each have an alignment, from Lawful Good to Chaotic Evil.19-20: Termaxianism. The Gods are too distracted by the Final Battle for All Creation to watch us.
Choice B. Go with whatever the Cleric in the party tells you to do
Hey man, he’s the religious leader here. His unique spell will affect you differently depending on what your faith is.If it helps, here’s a table showing how the faiths interact.Blank means the spell has the regular GOOD EFFECT on you.Smiley faces mean the spell has some EXTRA GOOD EFFECT on you.Frowny faces mean the spell has NO EFFECT or a NEGATIVE EFFECT on you.If there are Clerics of more than one faith in the party, it might be wise to pick something that works for both of them.
Choice C. Make an informed decision