Ah yes, the humble generic D&D village. The well, the washerwomen, the loosely described homes, and who can forget the remarkably large tavern?
This is all especially true since the nearest adventure locale is a few miles away and so you haven't really thought about this place. You can just sit back and say "uh yea uh sure" to most requests the players will make about local village services, so it isn't a big deal.

But! What if it could be ever so slightly more interesting? Here's a way to do that.

Some notes:
- This is meant to spice up a generic village, not create a proper adventure locale like Scenic Dunnsmouth. If you want a proper adventure locale, Logan at Last Gasp has got you covered.
- This is for creating a village quickly at the table when your players stop in. If they hang around, definitely bulk up the descriptions in the place between sessions.
- This is for making a small village of a few hundred people, most of whom the PCs won't meet immediately. 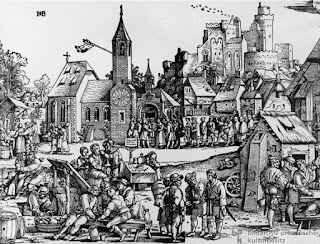 You're done! You just tossed some stuff on the table, added a few key buildings, and added some random tradespersons. That's enough to get going with and only took a minute or two.

In the example below, there was a house way out to the side so I made it the Church. The standing block totally represents the steeple.
The blue gem is the location of a well in the village green.
I usually make the Alehouse one of the blocks that lands on-edge (marked with coin in picture) but if you're using dice pick one of the 6's.
Rolling for tradesmen I got Mason, Fortuneteller and Furrier, so I marked them with the coloured disks.

Now the PCs can enter the village and start deciding what to do. When you've got a chance, you can quickly establish some relationships between people in the town. I use whichever people the PCs have interacted with so far, which usually ties the Alewife and a few of the Tradespeople into a little web of intrigue.
Vornheim, again, has a Connections Between NPCs Diagram which is very helpful in this regard.
Alternatively Logan has a list of relationships in the post I linked to before.

Make sure to add some sort of small-town intrigue in case the party ever comes back. It doesn't always have to be secret cults and mutant children chained in basements, just a bit of simmering jealousy brought to the boil by the sexy Fighter when he passed through or maybe a kid who wants to learn from the Magic User in spite of his apprenticeship to his father's trade.
Posted by James Young at 03:12