Whips, Wrestling and Other Combat Minutiae.

Combat rules yay.
An updated house rule document is coming, but for now here are some tweaks to combat in my game currently.

Wrestling in LotFP works super well.
Contested roll, 1d20 + melee bonus. Winner chooses what happens to the loser.
Nice.
It's simple, it makes Fighters better at it than other classes, if you fuck it up the enemy gets to turn the tables, it's just generally a good time.

Grapply monsters get double attack bonus when wrestling.
Nice.
Piling on someone means everyone rolls and you take the best.
Nice.
Armour doesn't matter when somebody's got your head in a vice.
Nice.

I've tweaked and codified it for players as follows:

Wrestling: Roll off against your opponent. 1d20+melee attack bonus.
The winner decides whether they Brawl, Disarm, Hold, or Kick Away.
Brawl means attack with a weapon or fists. Weapons must be Small size or less, normal fists do 1d2 damage.
Disarm means seize something in their hands or knock it away in a random direction.
Hold means you're trying to immobilize them. Hold someone three times in a row to pin them completely.
Kick Away kicks them in the direction of your choice.

I just looked up wrestling in pathfinder and fuuuuuuuuuuuck how do people manage.
I would also allow Disarm to steal anything the loser is wearing on their head so you can steal their helmet or fancy hat or number one headband.

I have long been satisfied by the Last Gasp weapon rules. They differentiate weapons in a way that's interesting without making them magical, and it lets non-Fighters get some little combat bonuses.
Also, weapons vs armour in a way that's not fussily actuarial, what's not to love?

But - flails.
Nobody takes flails.
Apparently nobody ever took flails?
Anyway, in Logan's rules it's like a souped-up Hammer with a disarm and a chance to nut yourself.
My players are too conservative for that, apparently.

Instead I'm replacing them with Whips.
- No damage vs any level of armour.
- Can be used to melee attack at range and initiate Wrestling from a distance
- In a wrestle the Brawl option is replaced with Get Over Here which pulls the loser to the winner.

This enables Indiana Jones shenanigans like whipping their weapon out of their hands and catching it or lassoing someone's legs so they can't move. It also means you can whip someone towards you for a shanking next round. The Kick Away option with a whip probably means you run up and power-kick them or maybe spin them like a top cartoonishly so they stumble in one direction or another.
Of course if you lose the wrestle the enemy can pull your whip out of your hands, drag you into shanking range or do these ones. 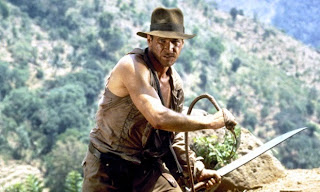 I also found Logan's "If you haven't been hit this round roll twice for damage, take the best" thing with swords to be surprisingly difficult to keep track of because I always forget and blah blah. I just made it apply to whichever side won initiative.
With some of the effects I had them apply on evens which makes it a fairly easy to adjudicate and means crits always trigger the thing. Greataxes on a charge are absolutely brutal, by the way.


Choppy: Axes. Damaging on evens does double damage to Light armour or less
Smashy: Hammers. +1 to hit vs Medium armour or better, damaging on evens notches armour (reducing AC by 1 until repaired).
Stabby: Swords. If your side won initiative roll twice for damage, take the best.
Shanky: Daggers. If you hit someone you can grab hold and shank the fuck out of them. Auto-crit on each round you win a wrestling roll. Anyone with a Medium weapon or larger can’t attack until they kick you off.
Whippy: Whips. Zero damage against armoured foes but can be used to melee attack and wrestle from 10’ away. Brawl option is replaced by Get Over Here which pulls the loser to the winner.

If your weapon can do more than one thing (like it’s got a hammer end and an axe end) or you’re dual-wielding, choose one modifier when rolling to attack.
Posted by James Young at 06:51