So you’re running Better Than Any Man.

There’s not much point reviewing Better Than Any Man. The best thing at Free RPG Day 2013, one of the best products LotFP’s ever put out, chock full of stuff, yada yada.
It’s free and good for 10 or more sessions of adventuring. That’s some damn good bang for buck.
And it's the best intro to LotFP out there.


I’d run sandboxes before, but nothing this dense. BTAM is now my model for my world map at the local scale. It’s actually pretty small compared to my big six mile hexes but it’s absolutely filled with stuff to do, and at it never feels small. Everything is close enough to the hub city for a day trip which is actually a really nice way to do it.
Alright, so you’ve got your hands on Better Than Any Man. You’ve got your hands on the free pdf of the long-windedly named Lamentations of the Flame Princess: Weird Fantasy Roleplaying. You’re all set. 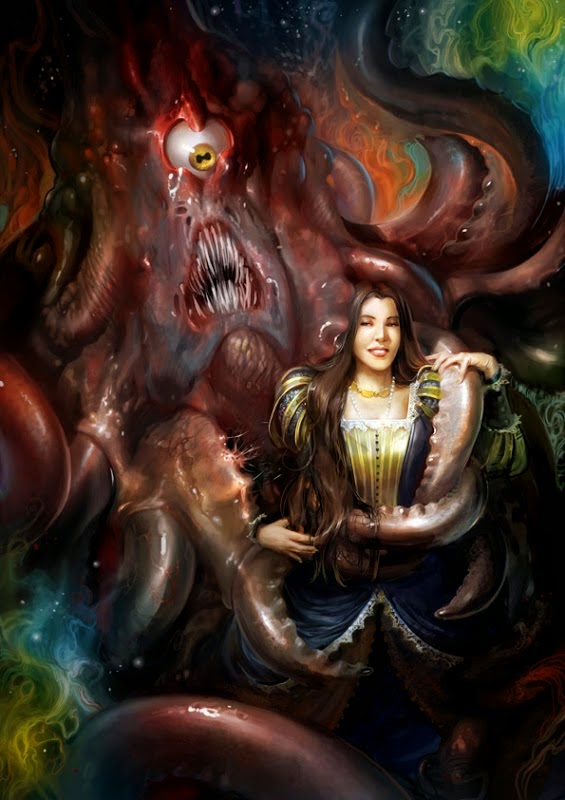 Here are some things that you need to know that aren’t explicit:

Monster HD = Attack Bonus. This rule is, bafflingly, only found in the referee book despite the referee book being unavailable and the rule being entirely crucial to gameplay. The referee book is not free and at time of writing is not even available since Raggi’s publishing a new one soon-ish.

Similarly, this is one of the reasons why some monsters have “2 Hit Dice (but with hit points of an 8 hit dice creature)” and similar which is confusing otherwise. It’s got 8HD-worth of hit points, but only attacks at a +2. The other reason is that they count as 2HD for things like Sleep spells which use hit dice to determine spell impact.
Also, if you were using Labyrinth Lord this is the HD you’d use on the attack matrix.
Encumbrance is simple but brutal. I was (and still am, truthfully) running off of the assumption that everything non-weaponry with the same name just goes into the same slot. Torch x3 or whatever.
Turns out that everything non-italicised in the equipment list, from rations to torches, each take up a separate slot. Harsh! They can likely obtain some porters somehow though, if only by promise of a better life and a share in the loot.
Considering the time limit on staying in the region, healing rates as written are very (or maybe, “realistically”) low. Chances are the characters won’t be able to rest up enough to get to maximum HP if they’re planning on getting anything done, especially if they have no Cleric support. I have house rules to bridge the gap (a First Aid skill and eating a ration healing d6 HP 1/day), but if you’re set on running LotFP as written keep this in mind.
Here’s a grab bag of things I added or changed:
Waking up in a dungeon is the best way to begin any adventure. Some shithead said that.
Rather than just wandering in from a map edge, the players wake up in the torture chamber under Goblin Hill. They are locals from the village of Thüngen who had been captured recently by the Bürgerfriedensmiliz. There is a single guard in the room distracted by the smells wafting from the kitchen. Their starting equipment is in the smaller cage in the room, and one of them has loose manacles. If there’s a demihuman in the party it’s them because the manacles don’t fit their wrists properly.
This isn’t meant to be a challenge to get out of, it’s just an initial setup, but waking up in chains means that the players have time to ask questions.  and build up an idea of what the room looks like and discuss their plans when the guard leaves the room briefly to grab some eyeball broth or whatever. It also means that they have a concrete reason to join up and stick together.

I expanded the random encounters into a larger encounter grid as seen here.
When people enter a village (“Entering a village should probably trigger an automatic encounter”) subtract 3 from the d6 roll, so they’ll find either spoor, a lair, or more commonly the thing itself.

As described in that post, I fantasy-ised the general early modern feel.
The Swedish became an army of demons.
Jews became Halflings.
Muslims became Dwarves.


The Watcher’s Detect Weapons spell only picks up objects that have been used in anger. Chiefly because the players had already been rejected from Karlstadt once and I wanted to let them in, but also because it neatly solves issues involving whether something counts as a weapon or not.
The Defiler’s creature as written sucks a person into their own personal sub-reality and fights their own creature tree. Fuck that, everyone goes down to the same layer. It was a heap of fun with people diving down the creature’s throat to save their friend and bring them back up a level. Make sure you make a foghorn-like BRAAAAAAAMMM sound every time someone goes deeper. The “real” creature fumbled and ate the Defiler herself at one point which was excellent, and to add insult to injury she’d just informed them that anyone who’s inside when it’s killed is lost forever.
Another thing about the Defiler’s creature – anything pushed into the creature’s second mouth (the one that recites the Canterbury tales) makes the object appear in the next sub-reality down but huge. They were nearly crushed by the Defiler’s spellbook at one point.
Beating the Joy at sex (or completing most of her increasingly seedy “missions”) means making an opposed roll, roll highest while staying below your stat as per house rules. You can use any stat you want so long as you can describe what you’re doing to make it relevant. Hee hee.
Up in Hammelburg there is a man who will pay good money (500sp) for help getting a pallet of his best wine out of the country. Payable once he's sold off his goods, of course. This is mainly because I wanted them to move off East to my main campaign map and the river goes there (heh heh heh). Incidentally, there’s a boat on the river and it’s not his…
Willibald Schwartz and Thungen’s “vampire” problem, which I expanded upon and might post some other time (basic gist at the end of this post), were relocated to Werneck. The players had never approached Willibald’s Mound and never encountered the glass tiger or even heard of the guy, so it felt legit to shift him around. Nothing’s canon until the players encounter it after all.
He made a great red herring. Crazy old wizard guy with a glass tiger meant that the player’s dominant vampire theory (until they found out the real culprit) was that the glass tiger was going and murdering people without Willibald’s knowledge.
Gunther Mohl the bandit chief in the Abandoned Farmhouse wore chainmail and had a big ol’ greatsword and 14 strength. He scared the shit out of the players, especially since I’ve got a house rule where great weapons add strength bonus to damage. The bandits also used the farmhouse-barn route to flank and disappear and just be generally tricksy in combat. 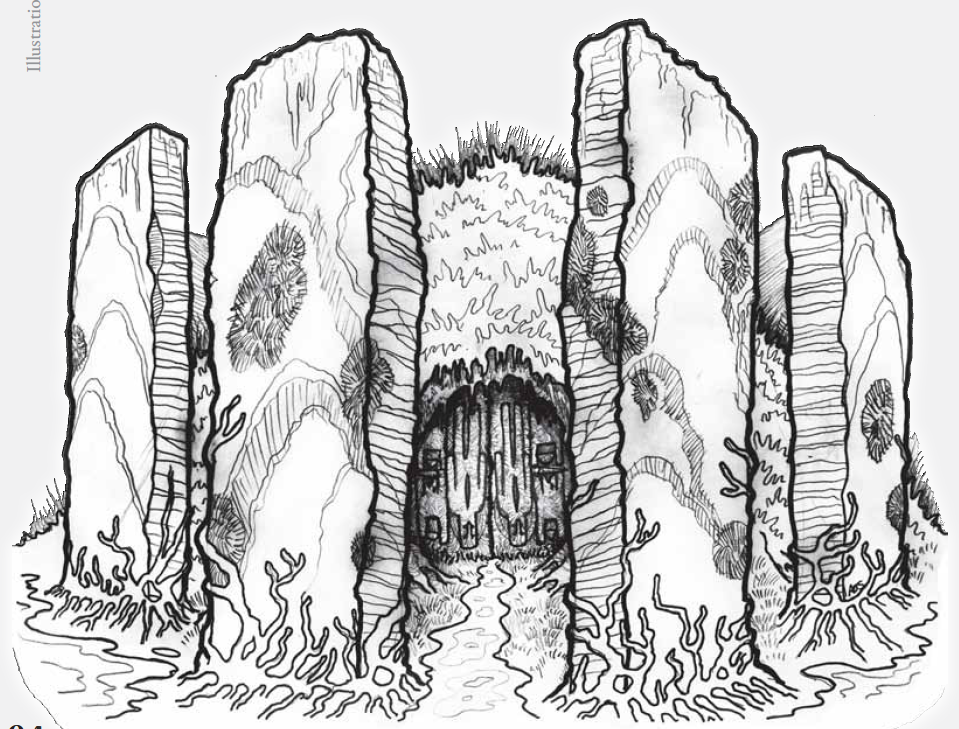 Some highlights from when I ran it:
Initial party of two (a dwarf and a necromancer) escaped easily from Goblin Hill. The necromancer had never played before. After the dwarf slipped his manacles and knocked out the guard, the necromancer showed good old school thinking and stole the guard’s cultist robes. She snuck the Dwarf out under the pretence she was moving the prisoner and they escaped.
That very same session, the Dwarf had his kidney forcibly removed by a giant rhinoceros beetle.
The Joy’s brothel/tavern became the de facto home of the adventurers. One of their number spent every night with the Joy and impressed her to such an extent that she later joined the party as a henchman.
The chief bandit in the Abandoned Farmhouse was judged “way OP” in his chain and greatsword. They eventually got him by wrapping a glue-soaked carpet around him then setting him alight, before diving into the cellar to escape the flames. Old Man Braasch the zombie horror was a nice surprise just when they thought they were safe. Purging things with fire, predictably, became something of a theme.
Attempting to cut off a lock of the Defiler’s hair as per one of the Joy’s challenges led to a long and mindbending fight through multiple internal realities at the hands (or rather, mouths) of the Defiler’s creature. The Defiler herself getting swallowed by one of the Creature’s fumbles was the icing on the cake.
On a related but unrelated-to-BTAM note, this was also the inaugural session of my new crit and fumble tables and they worked magnificently. A barbarian had shown up for this session only, and he managed to chain a fumble into a crit against himself and keep going about 5 times. He would have disembowled himself had I not gone soft and let him get tied up in his own no-damage mancatcher instead.
A raid on Goblin Hill to kill the Mother led to a variety of horror. The people in the kitchen had Sleep cast upon them, and following several minutes of furious debate over the morality of killing children even though they are cannibals, our heroes chopped the heads off of all the kids, branded them, and lined them up as a “warning”. In order to keep the other cultists occupied, the chefs were “spatchcocked” and artfully sewn together in a horrific meaty confection and carried out into the dining room to applause.
In that same raid they captured a war-ant (some of whose legs were later stolen by the Mother’s creature) and the Mother herself was instakilled by a critical Sneak Attack which dealt a full 24 damage.
The ensuing escape from her enraged Creature in the next session ended up giving people multiple new limbs. Later, when the wizard had finally managed to get his new knee-arm under control, he used it to dual-wield both a bow and a flail.
Finally, in the twelfth session of BTAM-based gameplay, they successfully sailed a river barge full of wine off the map. Two characters, after surviving everything BTAM had to throw at them, died upon contact with A Single Small Cut. God rest their souls.