Mysteries of the Dyslexic Mage

It is said that Gimblewang made a deal with the Devil.

"I want to be the mightiest wizard!" he must have said. "I shall create many new spells and my name shall be known in all the lands!"
"Well then, ok", said the Devil. "I will give you a choice. Either upon your death you forfeit your everliving soul to burn in hellfire for evermore, or I inflict you with a minor disability."
"Err, the second one thanks."

And thus was Gimblewang both blessed and cursed, for despite his mighty magical abilities and prodigious spell creating prowess, he always got words slightly wrong.

His prolific career in spell research and creation ("one of these days I'll make a good spell! You'll see!") resulted in a proliferation of unconventional yet surprisingly intuitive scrolls in the dark places of the world, especially since he could never manage to read his notes on where he'd left them.

Thus did the Devil uphold his end of the bargain, and thus too began the legend of the Dyslexic Mage. 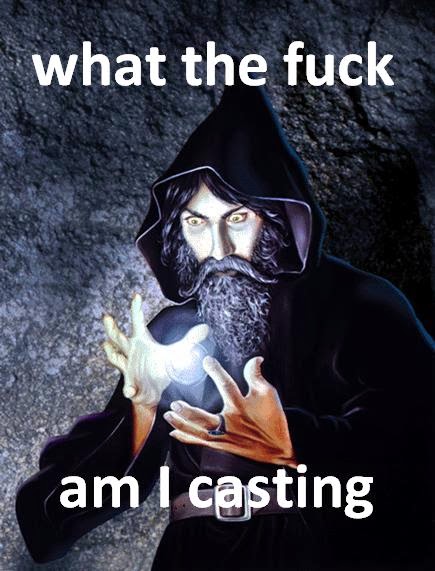 Spells of the Dyslexic Mage

Gloating Disk
A real arsehole of a disk follows you around for an hour, telling you all about how great it is to be a slightly concave, circular plane of force. Using it as an actual floating disk is fine but it will constantly brag about how much it can lift and mock the value of your loot and choices.

Manipulate Fir
Certain species of coniferous evergreen trees which commonly grow in mountainous areas will obey your every wish.

Peak with Animals
You and all animals within 50' get really fucking high together.

Explosive Prunes
Magic-Users are miserly and jealous people, guarding their healthy snacks as if they can take them to the grave. The caster draws mystic symbols upon a handful of prunes, raisins, figs or similar dessicated fruit. The prunes detonate when chewed, blowing the victim's head clean off and dealing 2d6 damage to all within a 10' radius, save vs Magic for half. The caster and any other beings specifically instructed can eat the protected snacks without triggering the prunes.

Secret Age
Any reference to the caster's date of birth is permanently expunged from history and memory and people's estimates of the caster's age will be off by at least 10 years.

Speak with Dad
The caster communes with their father no matter the distance. This spell does not make your dad any less disappointed in you for becoming a wizard but he's happy to hear from you and you should come home soon your mother really misses you.

Level 4
Dog
A random dog is teleported directly to your location from somewhere in the world, although it will not necessarily obey your orders and may never find its way home.

Polymorph Bothers
Polymorphs general nuisances and annoying people into another being of your choice.

Seven Gats
Gunmetal grey "wands of death ray" with handles and triggers and six charges each appear in the hands of the caster and six randomly determined nearby creatures.

Level 5
Interposing Han
A cocky smuggler with a heart of gold appears between caster and target. He always wins initiative.

Pisswall
The caster transforms a 10' deep, 5' diameter section of wooden, plaster or stone wall into one of those walls that everyone pisses on when they're walking home after a night out.

Level 6
Invisible Staker
Caster creates an immaterial being carrying an invisible wooden stake which moves and attacks as the caster directs.

Move Hearth
A single hearth, fireplace or log fire can be directed to move to the location of caster's choice.

Phrase Door
Enchants a door in such a way that it will only open to a stated phrase.

Level 8
Clenched Fish
Target aquatic animal becomes squished around the middle as though grabbed by a large and unforgiving hand.

Mind Bank
Brainbroker from the Cerebelow crawls up from the cracks between all things to give you competitive interest rates on brain loans. Utilise his services if you wish but if you can't keep up your payments their grell debt collection teams will hunt you and find you to reclaim moneys owing.

Amaze
Really genuinely impress people with every little thing you do for a few hours. Whilst this initially feels great it quickly feels boring and condescending.

Level 9
Power Word Kilt
The caster utters a word of power which instantly makes tartan dresses appear on all creatures within earshot. Underwear, of course, disappears too.
Posted by James Young at 08:30