The goblins which adventure in the world above their tribal hives are not the ordinary sort. Sometimes called hobgoblins, they are natural leaders of their kindred.
Like seeds dispersed by their mother tree they set out to find new and untapped areas in which to begin their own hives and start the goblin life cycle anew. They have the ability to bud off goblin workers (or buddies) which will obey their every whim.
They are naturally gifted in skulking around cities and dungeons, and have an innate penchant for locks and curious mechanisms.

More on the goblin life cycle and physiology can be found here. 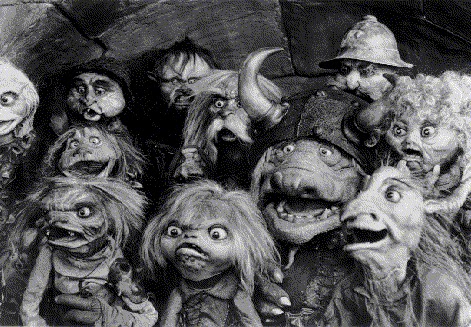 A Goblin can bud off further goblins at level 2 and onwards. It takes 8 hours and a place to plant the bud, and can be accomplished once per day.
At level 2, you can only have one goblin buddy. This maximum increases by 1 every level.

Goblin buddies are the ultimate henchmen - stupid, expendable, and fiercely loyal. They have a tendency to squabble, to impulsively grab treasure despite obvious traps, and otherwise act as redshirts for the DM. They also have a tendency to go missing around towns and cities.


I have quick class breakdown sheets for my players, it makes it easier for them to pick a class in a hurry after I've ripped up their sheet.
Here’s my new breakdown for goblins.

Be this if
You want to be a pernicious, sneaky goblin with an army of minions.

Being a Goblin
Goblins are green, sneaky, evil creatures with beady eyes and a big ugly hooked nose. They are impulsive and stupid and rude and greedy and vile. They live underground in their tribal hives, squabbling over the fungus which grows upon rotted matter. They are spiteful and verminous, and hate humanity above all else.

You are what is sometimes called a Hobgoblin. Capable of rational thought and tactical thinking, you are a natural leader of goblin society. Some hobgoblins stay in their hives to lead their tribes, others like you set out into the wider world to find a place to start a hive of your very own.
You will gain the unique ability to bud off goblin buddies which will answer only to you. Plus you’re tough and you’re sneaky and you grow up fast, and you’re great at tinkering with traps.

Alignment
You detect as Neutral.

Goblin Wiles
You are sneaky and wily and excellent at hiding in cities and dungeons, and you have a knack for locks and gadgets. You have a 5 in 6 Stealth skill in cities and a 3 in 6 Tinker skill.
Goblins are quick and lucky. You gain a +1 bonus to your DEX modifier and add a bonus +1 AC when you are not surprised.
You’re pretty small though, so you can’t use weapons that need two hands, and you need to wield medium weapons two-handed.

Goblin Buddies
Starting at 2nd level you’ll gain the ability to bud off a goblin buddy. This takes 8 hours and somewhere to plant the bud, and can be attempted once per day. At 2nd level, you can have a maximum of one goblin buddy at a time, but this increases by one every level thereafter.
Goblin buddies are the ultimate henchmen - stupid, expendable, and fiercely loyal.