Lore Garbage! I am so down for this.
Some random self-indulgent facts about the country in which my players are currently embroiled.

1. I only decided on the name "Loegria" a couple of weeks ago, even though this campaign map has been in use for several years. Loegria itself is an alternate version of England, the result of me mashing my original map onto the real world and messing up the geography.
Originally it was called "Tralsk" but I stopped using that after a year because I thought it was lame.

2. The world's history is a mashup of Dwimmermount, Hammers of the God, real history, and my own ideas of how demihumans and magic fit into all that. Thus the Gods are giant satellite-golems, elves are half-blooded descendants of the Red Elves of Mars, and Dwarves were once lords of it all.

3. Humanity was enslaved by the Halfling Empire until 0AD when Yeshua the First Cleric found the Gods and catalysed mankind's rebellion. Real world history generally reasserts at this point. The the Roman Theocracy echoes the Roman Empire (they liberated Loegria from the Halflings in 43AD) and replaces Dwimmermount's Thulians.

5. The immortal Fated King rules Loegria as he has done since 1066. While tradition states that the Fated King is the same king that conquered Loegria nearly 500 years ago, in actual fact there has been a succession of rulers since then. As each King dies a new host is secretly found amongst the populace. When a new king is acclimated their soul and personality is sucked into the Fated King's crown to join the souls of all previous rulers. Unless the host is particularly strong-willed the resulting personality-melange is actually pretty moderate and far-sighted.

6. The planet's core is host to a creature called Shub-Niggurath, a planet-eating organism that reproduces like a virus. Its initial impact formed the moon. Over the course of aeons it takes over a planet's core then grows and grows, eventually detonating to scatter thousands of space-faring spores to continue the cycle.
Such an organism seeds life upon the planet which it infests. This is merely an accident of biology. All life on Earth owes its existence to the organism in the planet's core, an organism that will be the cause of the planet's death. Its lysis draws near.

7. The tendril of Shub-Niggurath in Loegria was released by the actions of a previous band of PCs, indirectly causing the mold and slimes and all the rest. The Undead Army currently ravaging the country (as it has been for a couple of real years now, thanks Death Frost Doom!) are part of an ancient failsafe to counter and re-imprison it. The undead aren't affected by the mold, and the ritual to imprison a tendril of Shub-Niggurath requires over 1000 willing sacrifices.

8. The Twin Cities of Edge and Dwarrow are two cities sort of overlaid upon each other. The citizens of one "city" completely ignore the citizens of the other. This is not in any way a magical effect, although supernatural entities consider them entirely separate and thus will only attack one or the other. 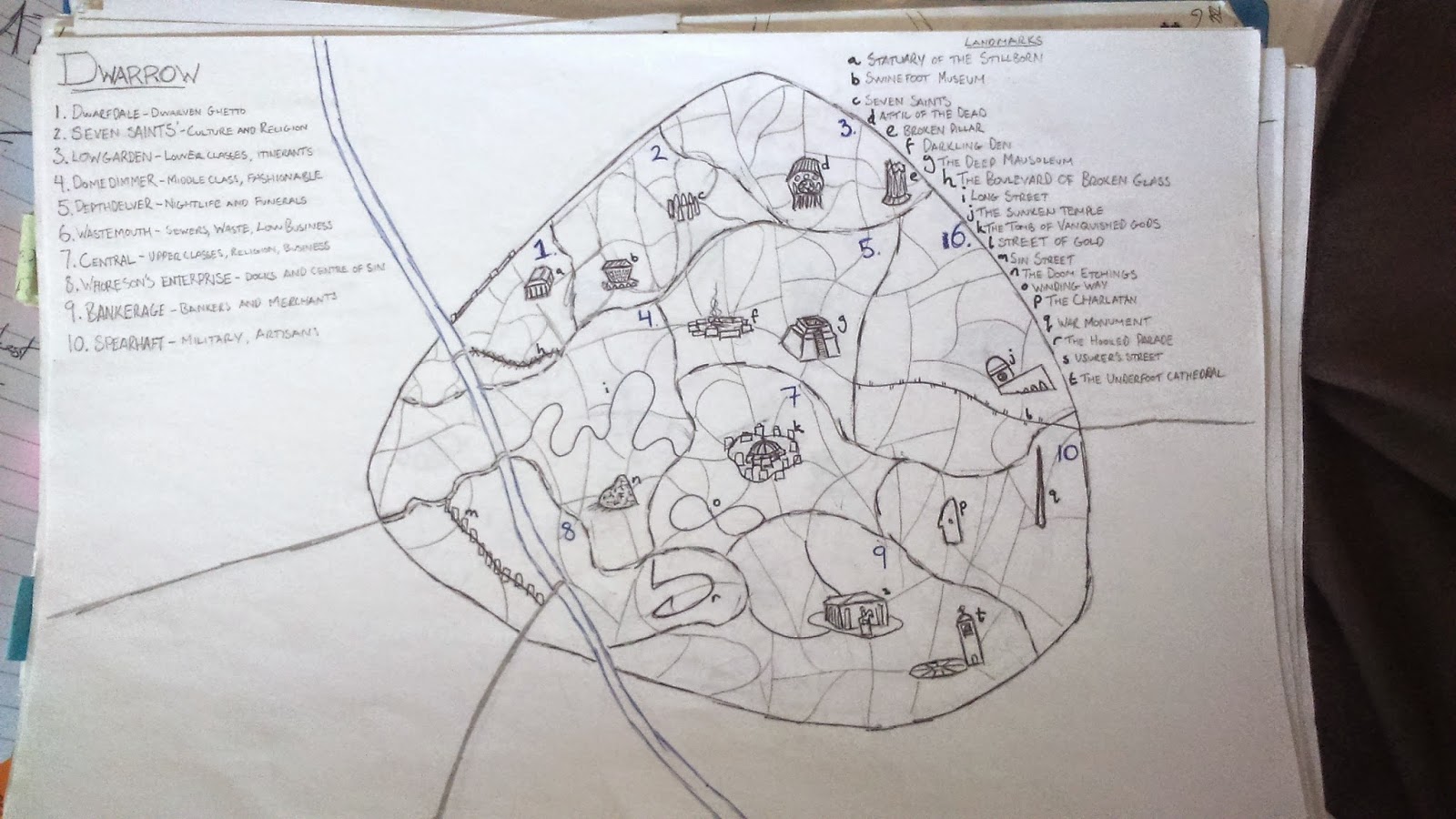 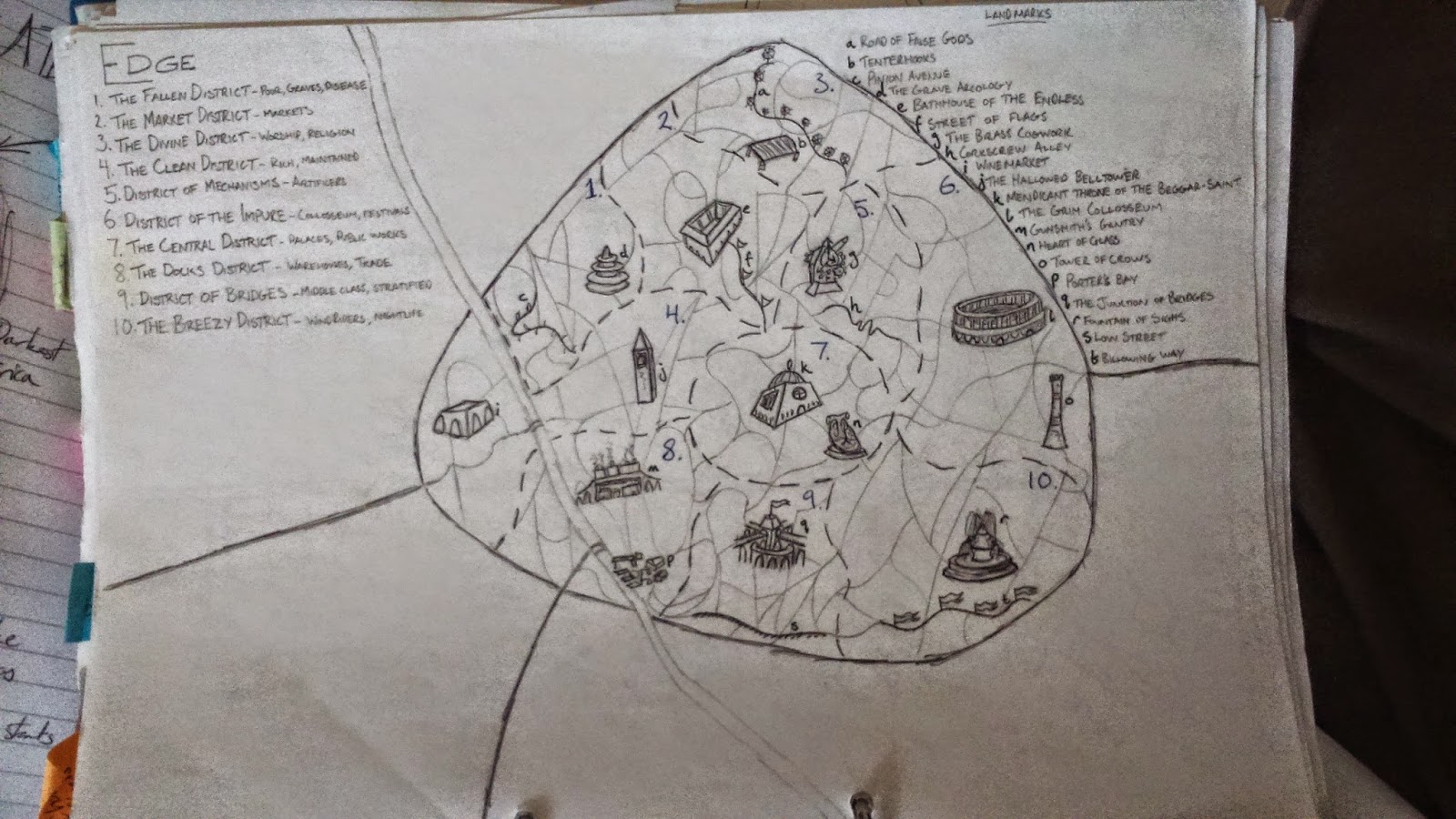 9. Fortress City Fate is the only place in the known world where people can be brought back to life. Living there is both hedonistic and incredibly expensive as a result, with an economy based on the buying and selling of the "Raise". Professions are encouraged to enter or leave the enclosed economic system via a byzantine and constantly changing system of taxes, levies and incentives. Outside of the Actuarial Corp, few professions have any real security within Fate's convoluted yet socially responsible framework.
People put up with this because living in Fate is the best standard of living one could attain in this life.


10. An ancient dragon known as the Grudge Drake was captured and de-winged by the goblins of the Drudge Wastes long ago. It it many storeys tall and covered in crudely worked armour plate, its movement powering the great goblin machines built all over its body. The goblins use it as a walking fortress, moving factory, and regenerating food source.
Posted by James Young at 05:43