So I Ran A Single, Small Cut - A Review with an Anecdote


Some choice quotes from my players:

“Don’t take weapons into the church? Fuck that I’m waiting outside. You talk to the priest.”
“If the priest was evil why would he point out the bandits for me? Oh shit he’s behind me isn’t he.”
“I’m going to wrestle him into the altar door thing… ok I uh.. I rolled a 1.”
“I run in and wave my arms around like in Men in Black when they’re trying to distract a monster and yell at Kacey to get out of here.”
“You’re dead?! No way am I running, my character wouldn’t go on living without you. I’ve got.. like.. 9 flasks of oil, 3 jars of that black stuff that we think is explosive, and I never washed my clothes after I fell into it. What do I roll if I blow myself up?”
“I walk past the people outside and tell them – it is done.”

First deaths of the England campaign! And they were way more dramatic and far less shitty and futile than I would have predicted for a campaign based on LotFP!

What did I change?
To make it a bit fairer for lower level players (no fun if they get murdered by humans before the monster shows up) -
The fighters with crossbows up top were just regular unclassed dudes with crossbows.
The Corrector of Sins had the hit points of an 8HD creature while keeping the +12 to hit (not that it mattered in the end..)

Did I like it?
I need to make some stuff like this, having a pocketful of One Page Dungeons is fine but having a few slottable set piece encounters around is tops too.
Simple little mostly-just-an-encounter with a nice map of a church (reusable!) and some cool stuff the players didn’t get to yet, mostly due to the aforementioned deaths.
Corrector of Sins is badass but escapable and looks like it will be fun if/when the players claim the red bell that summons it.
I liked how it specified the priest talked in a nasal voice because I don’t do that voice often and I had a cold so it went well. More modules should specify NPC voices.
Some of the info could be summarised or highlighted a bit better, mainly because I was running this off the cuff, but it’s certainly short enough to skim over while your players are trying to work out what to do.
They haven't actually gone back to check out the crypt part yet with the potential second Corrector so that should be funky, even though the dead bodies above are mostly ash.
All in all, good for slotting into your campaign whenever people are going somewhere and you need an hour or so of material!

What happened when I ran it? 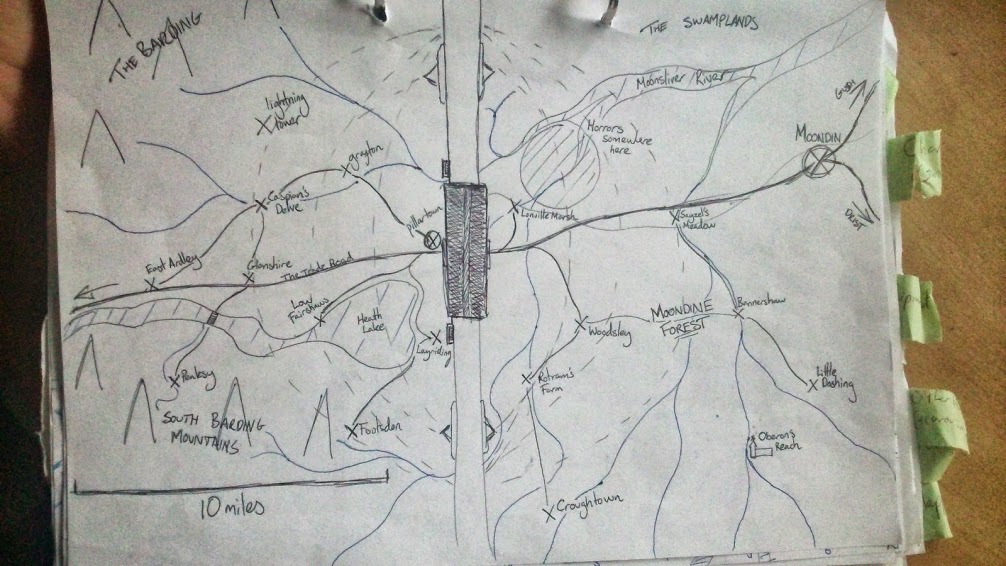 Rather than initiate time travel shenanigans as I'd anticipated, a low player count and lack of wizards meant that last night's party decided to do other things, namely travel out of BTAM's play area and into my new one, seen above.
With a large pallet of wine to sell off, the party see a church from their stolen boat and decide that it’ll be the perfect place to liquidate their assets.

They are a Thief (Specialist 3) and an Assassin (Specialist 2), who have made a name for themselves as the Redeemers, along with a Mercenary (Fighter 1) who they have never actually met before but seemed cool with getting paid for this.
While the Thief goes to check out the wattle-and-daub village, the Mercenary and the Assassin approach the church doors.
Within, the priest’s unpriestly aspect goes unremarked but the admonition to disarm in a house of the Gods draws immediate suspicion. The Fighter bugs out and prowls around the outside of the church to see if there’s anything suspicious because putting down his spear for half a minute is out of the question.

The Assassin follows the priest in and an ambush occurs! It is assassin vs assassin, garrotte vs hidden garrotte as the priest reveals his true colours close to a smashed-in door below the altar! The Mercenary, drawn by the noise, sprints in and is instantly peppered by crossbow bolts from above! He reels back and ascends the stairs to the upper level with vengeance in his eyes.
Two scared-shitless guys sprint up the stairs beneath the altar, so the Assassin attempts to kick the false priest down it to forestall whatever’s chasing them. He fails badly and get half-strangled for his trouble, but at least the priest is closest to the altar door now.

The Thief has been drawn by the sounds of battle and enters just in time to see a horrible meat monster ascend, devastate the false priest with flailing intestines, and significantly wound the Assassin.
As the Mercenary cleaves through two enemies above and causes the rest to flee, the Thief runs in and starts waving his hands around “like in Men in Black when he’s distracting the monster”. I distribute the creature’s attacks randomly – all on the Thief. It looks like it worked.

The Thief beseeches the Assassin to flee as the creature violates him to death under a torrent of toothed intestintacles, but the Assassin will not run.
He realises that the Redeemers have been through too much together, that he can’t go on living on his own. He realises that if the creature gets into the town it will kill everyone around, and that up until now they’ve ruined people’s lives no matter how good their intentions were.
Plus that witch made them fuck each other that one time and he’s been harbouring confused feelings ever since.

The Assassin sees the Mercenary backing out of the door. Smiles.
He takes stock of his inventory – 9 flasks of oil. 3 jars of sticky black super-oil from the wizard’s cave. 1 set of unwashed clothes covered in the same sticky super-oil.
He takes a candle.

“All this time we’ve been trying to redeem other people", he says, "now it’s time to redeem ourselves.”