Main changes are adding some tables to roll on when Chaotic classes research spells, and adding a minigame where Clerics can craft Protection Scrolls by killing stuff with a blessed weapon.
Hopefully it's more interesting than the default!

So spell research! Something I'd never really thought about much.
Base LotFP has it as a time sink and a money sink. You gamble how much time (and thus, money) you're going to spend, the DM rolls how long you actually needed to spend, and if you gambled too low you lose the time and money.
As Perttu is fond of saying and Logan points out in his spell research rules, this is boring as fuck.

The reason I haven't really gone into it much is that I quite like time and money sinks.
Time sinks mean I can jump the timelines of various encroaching dooms forward, and also hopefully make game time keep up with real time.
Money sinks are because it's always nice to have another thing for players to burn money on.
Keep them poor. That keeps them hungry for more!

The other thing is I quite like the idea that a wizard spends time researching spells alone in a tower while their friends are having fun carousing in the town below.

The Last Gasp spell research stuff is pretty kickass, but I do want to keep Spell Research as a downtime time sink and my wizards have got more trad spellcasting mechanics than Logan's Maleficar.
Also I needed to put Cleric spell stuff on there.

So I basically boiled it down to this. Intended to be printed double-sided.
Costs in silver standard as normal for me, change it to gp if you use a gold standard.

The chief gimmick is still that it's a gamble, except unlike base LotFP a failure means you suffer some sort of negative consequence beyond just wasting time and money.
This is most notable in Spell Research itself. You could lose that spell slot forever!
On the other hand I don't want manufacturing consumable potions and scrolls to be a massive risk. What's the harm? They only get to use it once, and it's never actually come up in my game yet.


Some notes on modifiers:

Some notes on the rest.
Changes for those who aren't using all of my house rules in Courier: 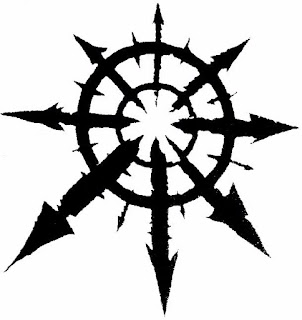 Clerics, as the only Lawful caster class, have a less random system.
Because Law is reliable and Chaos is random. Something something thematic mechanics.
I also like that Holy Water and the new Protection Scroll mechanic require returning to the same church every day. I like this because Clerics are encouraged to stick around one church for a while, even if they adventure in the meantime.

Holy Water:
Pretty much as per LotFP. Bless the same font of water every day for ten days, receive a vial of holy water.
Differences are you can make a few at a time if you're willing to use up more than one Bless per day (not explicit in the LotFP rules), and if someone drinks it they get affected by your Denomination Spell.

Spell Scroll:
As per LotFP, without the rolling.

Protection Scroll:
Big changes! And hopefully a fun mini-game.
LotFP has some strange mechanic where you have to sacrifice creatures of the appropriate type and the total HD slain is the percentage chance the scroll is actually created.
Which is cool and all, but having to commit goblin genocide in order to reliably get a scroll that keeps them away for up to an hour is a hard sell. By the time your scroll's ready, there won't be any goblins left!

Now its a minigame where the Cleric has to kill creatures with a special knife they create, and at some point they'll have killed enough for the Protection Scroll to be completed!
You can still do this in a church, and it's still percentage based (guess I lied when I said god doesn't play dice with the universe), but the key thing is that you can make your sacrifices when you're out adventuring.
Want to make a Protection from Goblins scroll? Go out there and kill goblins! With the knife! In the name of your god! But make sure you're only killing goblins, anything else makes all your prior effort for nothing.
You could also kill just one goblin then wait around until you eventually get the Scroll. It's 50sp a day and you've got to stick around the church though.

This also leaves it open for Clerics to have multiple Protection Scrolls (and thus multiple ritual knives) on the go at once, making sure they're murdering the goblins with their Goblin Knife and humans with their Man Knife.
I don't think there's a literary precedent for this, but it sounds pretty cool.

"What if I don't want to use a knife?!"
Any minor weapon is fine, mostly so you have to remember to use it if you want those sweet sweet Sacrifice points.
Fuck, although, a wax-sealed pistol reserved for killing demons would be rad as hell. Maybe you have to put a seal on every shot?! I'd probably allow this.