Next we get to the Weirder Shit with the Dwarf. By rights they are king shit in dungeons.

Low light vision: Dwarfish eyes are much like ours, the difference is that they adapt more quickly to changes in brightness and can see in the dark.
They take a single round to adapt to changes in light level and can see in pitch blackness. When seeing in the dark everything is greyscale and fuzzy like when you wake up in the middle of the night.
Dwarf eyes reflect light like a cat’s which might be seen by someone with a light source.
From a land down under: Dwarfs instinctively know the direction they’re facing and sense changes in elevation,  but only when underground.
Natural craftsman: With only simple tools and half a day a dwarf can repair a single Notch on a weapon or armour.
Runesmith: Distance and complexity penalties for powering glyphs are one step less severe.
Lorebonds: Detailed in Secret Santicore2013 vol. 1, pg 23. Every third level a dwarf may choose a new Lorebond which gives them strange and unique powers, but requires a quest and, on completion, an unbreakable taboo or "geas".
Additionally there is a Lore of the Glyphs which boosts rune magic.
1 – You can power glyphs instantly without giving up your actions.
2 – You can draw a complete glyph in a single round.
3 – You can set glyphs to be always on, taking no effort to maintain.

Hey so you know how Race as Class is kind of dumb because there is no reason why you shouldn't be able to have an elf thief or a dwarf cleric?
Fuck you, buddy.
The reasons why race as class are in effect are manifold:
- I have a humanocentric setting and your standard late edition motley crew of various uncommon races in a variety of classes dicking around in the countryside never felt right anyway.
- You want to be special in multiple ways? Christ man you're already a dwarf and now you want to be a cleric too? You already get badass abilities above the human norm without having to double dip!
- Race and class being the same means I get to bake strange abilities into different races without worrying about balancing the options.
- Giving you more than one choice at char gen means the option combinations are too damn high and they guy who loves charop will spend way too long trying to find the ultimate combination of race/class/stats.
- I want Dwarves and Elves stuff to be so fucking weird and inhuman that there is no way they can fit into the standard class niches.
- But seriously, fuck character optimisation.
- etc 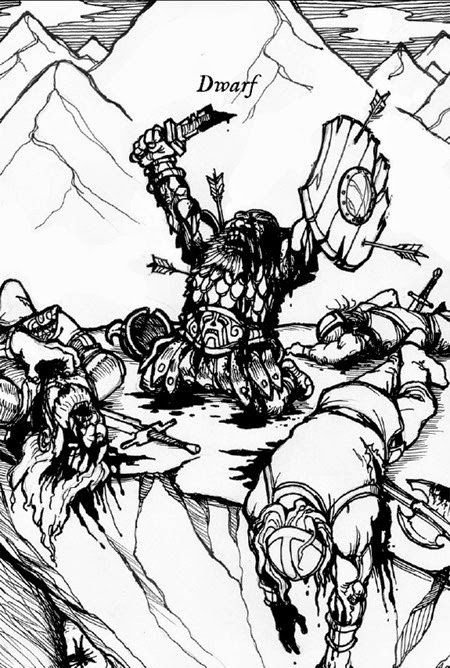 Low light vision is because dwarfs live underground. How do we see in the dark? Rods, baby. And what are rods bad at? Visual clarity.
You know when you wake up in the dead of night and your eyes barely adjust to the lack of light and everything is greyscale and blurry? That's how dwarfs see, but they can do it even in pitch black and their eyes adjust quickly. If I wanted to go hardcore I'd make them lack colour vision but that doesn't sound so fun.
It also has some interesting implications for dwarf architecture, deep sculpture has to be either big enough to see in blurred outlines or beautiful by touch. Dwarfs don't do paintings so good because they can't see them very well in the dark, but sculpture is all the rage.
That engraving of cheese might look silly to you in the torchlight, but touch it in darkness and you will feel beauty.
The thing with the eyes was added on a whim. Eyes glimmering in the depths is a thing miners see or saw, hence kobolds et al, and as elves are night-bogeys and hauntling glisters that haunted our suspicious and paranoid ancestors, the Dwarfs are the strange sights and sounds our (relatively recent) coal-mining ancestors heard in the deep and claustrophobic places beneath the earth.

From a land down under is a cheap joke because all Dwarfs speak in an Australian accent, didn't you know that?
It cements the Dwarf as the Usefulest Guy in dungeons because they live in them and know all sorts of things. Also dwarfs stay underground because they are more comfortable there. Imagine if every time you left the house you lost the ability to hear sounds, you'd stay indoors as much as possible right? That's why dwarfs stay underground.

Natural Craftsman is to make dwarfs even more useful in dungeon running. They can fix your stuff pretty easily even when you're off the beaten track. They're good at this stuff.

The Runesmith bit is to make dwarfs cool in another way that isn't so over the top. They're good at runes for Backstory Reasons and some of their Lorebonds (below) interact directly with the glyphs.
While humans and other races can use rune magic, Dwarfs use it better.

Lorebonds are because I asked for them for secret santicore and it is perfect. I fiddled with the actual effects and added a rune-related lorebond. They're also unlocked every three levels, not four.
Changes are here.

Societally, my chief inspiration for Dwarf society is Deep Sounding.
Posted by James Young at 16:51